Demon hunter Dante gets a new look, new moves and a new sense of purpose in series reboot DmC Devil May Cry, which gives Capcom’s flailing series the kick up the backside it needed. Read on to find out if DmC manages to best the classic series’ once-lofty highs in our full review.

Distill your fondest memories of the Devil May Cry series down to their most important parts, and what are you left with? We’d bet that, rather than it being an overwhelming fondness for the overwrought plot, your favourite parts of picking up the Devil May Cry games was their speedy, fluid combat. By wiping the slate clean but retaining and building upon that core combat goodness, new series developers Ninja Theory with their reboot DmC Devil May Cry have delivered a slick, streamlined brawler that returns the franchise to its former glory.

Battles in DmC are mesmerising. Supernatural protagonist Dante has a magnificent arsenal of weapons at his disposal, including a sword, dual pistols (affectionately named “Ebony” and “Ivory”), a hook-tipped chain, a gigantic scythe and molten-hammer fists, and it’s with these that he’ll deal out damage to the denizens of the underworld that look to do him harm. 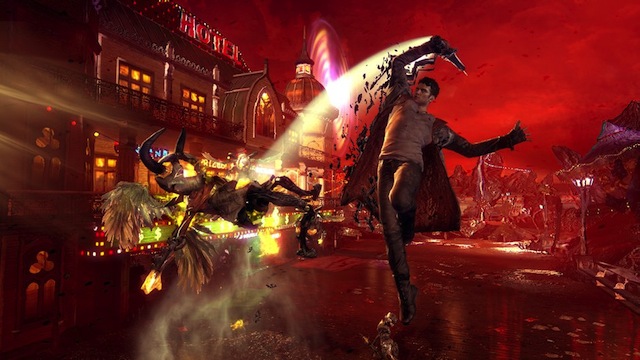 But it’s the way that all weapons compliment each other and their movesets weave together seamlessly that makes DmC such a joy to play. As well as standard sword slash and pistol shots, holding down the left and right triggers activates Dante’s “Demon” and “Angel” movesets – the former dealing out slower, localised damage on foes, the later allowing Dante to deliver area of effect attacks or jump to an opponent in an instant or drag them closer. Incredible numbers of enemies will attack Dante at once, and using all his skills to create a harmonious dance of death is breathtaking. Success in battle builds up a meter that lets you unleash “Devil” mode too, slowing down time, allowing for more precise attacks and the chance to restore some health.

Dante’s animations see hundreds of moves segue into each other effortlessly, and while the onscreen action can become complex, neat visual, aural and physical cues (such as the rumble of the controller) mean even series newcomers can quickly get up to speed with how best to string together destructive attacks. 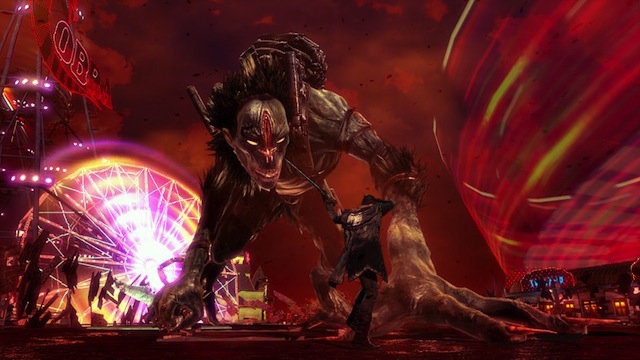 Combo chaining is a big part of what makes DmC’s gameplay so addictive. Each string of attacks is rated, and you’ll be graded after each battle on both your offensive and defensive capabilities, aiming to get a coveted “SSS” ranking on each level. Better combos also afford you the opportunity to unlock more devastating skills, but there’s genuine joy in repeating sections just to chase down a high rank for its own sake.

Mastery of the combo system requires you to learn the tricks and feints of the many varied enemies that Dante encounters, and the standard grunts on offer here are among the most fun we’ve had the pleasure of slicing up in a long time. From ghastly mechanical cherubs to brutish chargers, they look sublime and offer a stiff but surmountable challenge, with erratic patterns and tightly guarded weaknesses.

Enemies, as with the rest of the game, look awesome, and Ninja Theory’s art direction should be applauded. The game world itself, often tinted with red hues or vibrantly saturated colours, is a marvel to explore. Set predominately in the supernatural plane of Limbo, the world under Dante’s feet is regularly shifting, leading to Escher like visual illusions and mind bending set pieces that turn the world on its head. 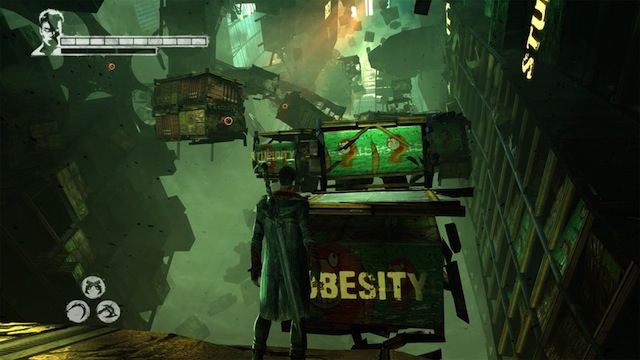 This is all wrapped up in a story that’s far more satisfying than what the series has managed since its first outing. It’s a whole new take on the demon slayer Dante, who is revealed to be the offspring of both demonic and angelic union. Though still a badass sword-swinging gun-slinger, Dante’s journey of self discovery is revealing, exciting and surprisingly emotional. He’s still a mouthy git at times, but such moments of arrogance are set in relief against more relatable traits that make him a far more likeable protagonist. That said, we’re still not sure about his new-look emo mop of hair.

There are a few points where things don’t flow quite as well sadly, and these hiccups are unwelcome punctuations to the otherwise sublime ebb of the gameplay.

Boss battles, once one of Devil May Cry’s most eagerly anticipated moments, fall flat in DmC. That’s not to say that they’re bad; in terms of scale and spectacle they are often dazzling. But they rely far too much on pattern memorisation and weak spots, making your well practiced combo skills all but obsolete. The same goes for colour coded enemies later on in the game, who repel or succumb to Demon or Angel attacks based on their shade. It leads to a staccato combat effect that stifles that game’s best feature. 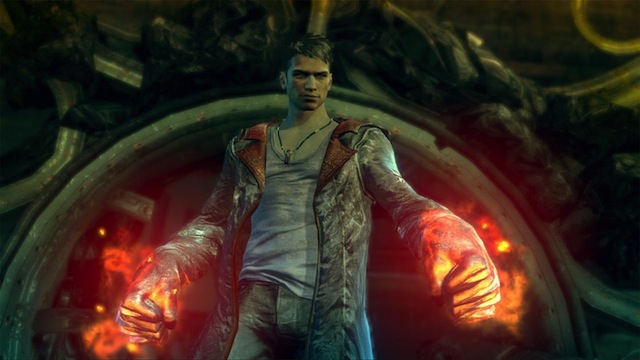 Platforming sections similarly struggle. Dante’s never been a Mario-alike when it comes to jumping, but platforming sections always seem to find themselves shoehorned into Devil May Cry games. DmC is no different, and they’re just as frustrating as ever, with a slightly ill-judged leap too often costing you dearly. Segments when Dante is required to hook onto nooks and crannies and swing through portions of levels look great, with dynamic camera angles and dramatic drops below, but feel aged and linear, never inspiring tension and only acting to distract from the core baddie-bashing goodness.

DmC lasts around 10 hours for a first playthrough, and though the later portions of the game lose narrative thrust and introduce too many platforming sequences, the pacing is otherwise breakneck and the length satisfying. However, it’s only once you beat the game a first time and unlock the Son of Sparda difficulty mode that you realise the best is yet to come. 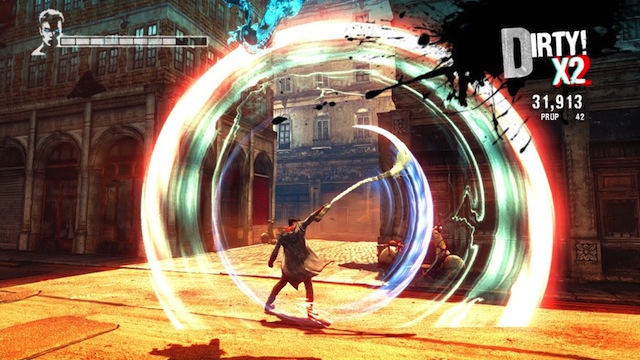 Once you’ve honed your skills on the initial difficulty levels, Son of Sparda mode feels like the difficulty level the game was designed to be played on. Though brutally difficult, with hordes of far more aggressive enemies sent your way on each level, it affords you the ability to chain together even more ridiculous combos and finishers. The level of concentration needed to succeed lends a play session an almost zen-like quality, and the feeling of satisfaction when you overcome a particularly nasty area is one here rarely felt in modern gaming.

Some will argue that DmC Devil May Cry is an unnecessary reboot, that the series just needed another good sequel to get the wheels in motion again. They’ll be wrong. By re-inventing the lead character, giving him a more relatable and entertainingly written story, increasing his skill set without sidestepping accessibility for newcomers, Ninja Theory have achieved with DmC something that the bloated Devil May Cry of old was increasingly becoming incapable of. Cool without being stupid, fun without being easy, DmC successfully walks a fine line that so many reboots fall off of, one that nods towards the best bits of a beloved past while building an exciting path for its future.