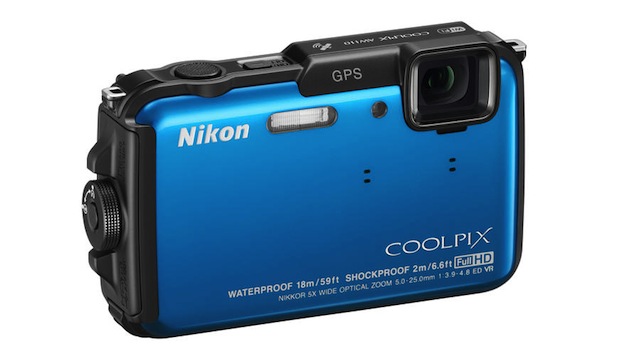 The AW110 is the premium model, packing in a 16MP backside illuminated CMOS sensor, 5X optical zoom lens, ISO up to 3200 and a 3-inch 614k dot OLED screen on the rear.

It’ll take a beating too, with tough credentials including waterproofing as deep as 18 metres, shockproofing to protect from drops as high as 2 metres and freezeproofing for icy climes of as low as -10 degrees.

Built in Wi-Fi and GPS allows for images to be transferred to a smartphone or tablet, ready to uploaded with geotags to social networks; handy if you’re adventuring ways get cut short due to avalanches, alligator attacks or some such other ‘XTREME’ occurrences. Nifty sensors including an altimeter and hydro-barometer also let you record altitude and underwater depth too, while there’s a built-in world map for keeping track of your travels.

Those on an antarctic trek will also appreciate the Action Control feature, allowing you to swing the camera from side to side in order to change settings thanks to motion sensors. Might get a little bit annoying if you’re moving a lot trying to capture a subject in motion however.

Next up is Nikon’s Coolpix S31. It’s cheaper at £99.99 but still has tough credentials that could see it go a round or two with the Klitschkos, even if it’s aimed more at butter-fingered families than thrill seekers.

Housing a 10MP sensor with a 3x optical zoom, it is waterproof down to a depth of 5 metres, shockproof from up to 1.2 metres and dustproof.

Ease of use is key to the S31’s design, with a symmetrical design putting the flash in the centre, simple colourful menus for easy navigation and one-button switching between video and still shooting. Plenty of creative filters and shooting modes add a little fun to your shots, while anti-blur technology is onboard to help amateurs achieve sharp results.

It too will be out in February.