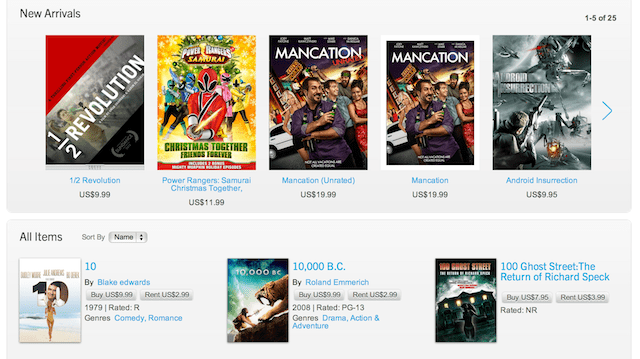 RIM has beefed up its BlackBerry World online storefront ahead of today’s massive BB10 launch, bringing new video content to the iTunes rival alongside music, apps, games and themes for the new line of smartphones.

As it stands, video content is only available through the US and Canadian versions of the store, though RIM have previously promised that the store will open in its entirety to UK customers to coincide with the launch of BlackBerry 10. Probably just a few hours wait until the video store opens in Blighty then. Entertainment content will be initially exclusive to RIM’s new BB10 devices too, looking to encourage present BlackBerry owners to upgrade.

So what’s on offer then? Nothing to exciting at present – the biggest new release we could spot was Taken 2 for $4.99, while the straight-to-video thrills of Mancation seem ridiculously overpriced at $19.99. TV content fares a little better, with shows like Modern Family and How I Met Your Mother present. It’ll do until LoveFilm or Netflix streaming apps launch then we suppose.

Tech Digest will be heading down to the London leg of today’s BB10 launch, with the event kicking off at 3pm. We’ll be providing up-to-the-minute coverage of all today’s launch news this afternoon, but for the time being you can check out the new store by visiting //appworld.blackberry.com/webstore/.