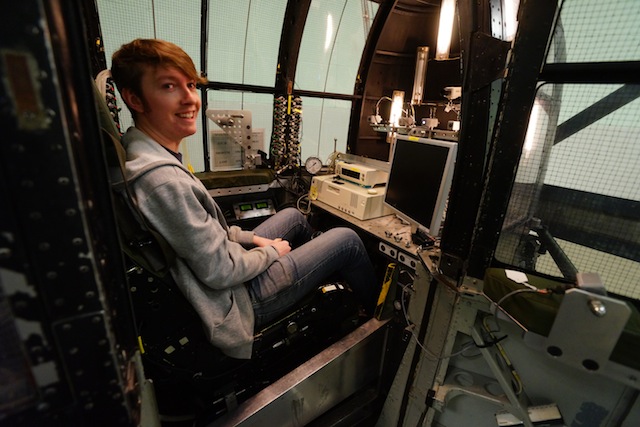 I’m sitting somewhere in the middle of a former RAF base in Farnborough, strapped into a tiny recreated jet fighter cockpit, on the end of a huge mechanical contraption that wouldn’t look out of place in an Alien film, a disarmed joystick sitting unloved and flaccid between my legs, all the while hooked up to machines monitoring vital signs I didn’t even know were necessary to my day-to-day survival, psyching myself up for a ride that makes even the most extreme theme park attractions look like a stroll in a pushchair. And I’m cursing myself for agreeing to last night’s pub-crawl-and-curry outing. What the hell have I let myself in for?

I’ve been asked to do some mad stuff during my time at Tech Digest. I’ve reviewed a mobile phone while stuck for hours on a roller-coaster. I’ve made electro pop pioneer Jean-Michel Jarre agitatedly climb a ladder for the sake of an interview. I’ve spent a hellish, moneyless week in Las Vegas for the CES conference before going “a bit Nicolas Cage”.

But nothing comes close to being strapped into a human centrifuge.

I’m at QinetiQ HQ (a military defence contractor whose experience with aviation physics is matched only by their ability to build death-dealing robots) as part of a press day promoting EA’s Dead Space 3 game, a sci-fi horror title that’s going to have its work cut out replicating the genuine fear I’m going through. 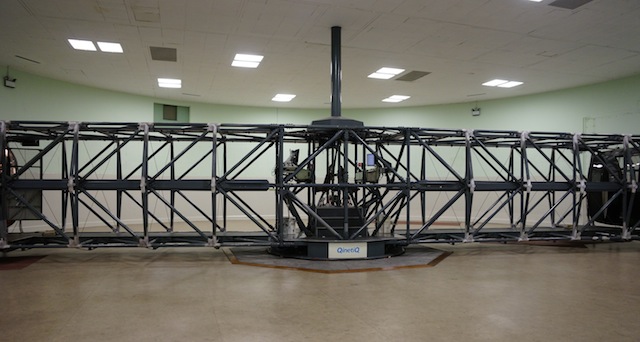 “Where’s the link?”, I hear you cry. Well, Dead Space 3 is set in space (duh) and a human centrifuge is one of the few ways to experience the sensation of “pulling” G-force while keeping your feet close to the ground, the same sensation experienced by jet fighter pilots and spacefaring astronauts.

Pulling G-force on the end of the spinning arm of the centrifuge increases the gravitational strain on your body, multiplying your weight in line with the number of G-forces experienced. It also messes with the way blood is pumped around your body, forcing its distribution down towards your feet, depriving your brain of oxygen, playing havoc with your vision and triggering a lack of consciousness somewhat affectionately known as “G-LOC”.

As a first timer I’m allowed to go as high as 4.4Gs in 15 second bursts. As much as I’m going to feel like Tom Cruise in Top Gun then, for the next couple of minutes I’m going to feel just as much like a 44-stone, blind, semi-conscious version of myself. Great fun.

It’s the sort of equipment usually reserved for use by highly trained military personal or bonkers test subjects. I guess I fall into the latter category. 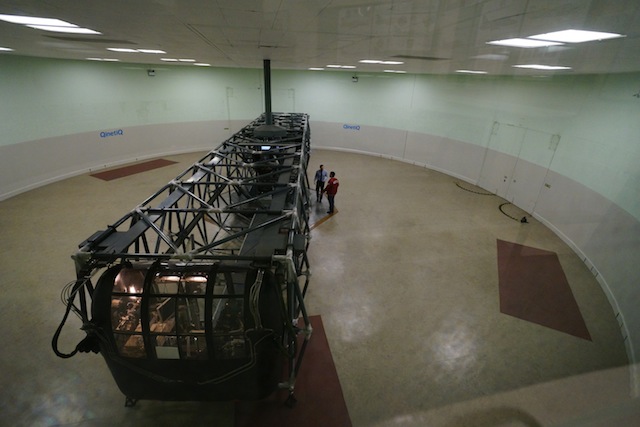 The centrifuge itself looks like a giant Meccano construction set; a 47-tonne series of overlapping metal poles roughly 15 feet high and stretching from end-to-end of a circular, sixty-foot diameter room. The 58 year old machine is fully mechanical with no transistors or software controls; a blessing considering a software error could trigger G-forces way beyond human endurance.

In the middle sits Henry Lupa, principal medical officer and chief aeromedical and aerospace medical advisor at QinetiQ, and master of ceremonies today. He’s surrounded by an array of screens and monitoring equipment at the machine’s centre, spinning on the spot at the fixed point of the centrifuge, totally unfazed by his dizzying day job and its uncanny likeness to a scene from Flight of the Navigator. His voice is piped into my cockpit, disarmingly calm and comforting for someone about to inflict unnatural amounts of stress on my body.

“We’re going to start you off nice and easy at 2.8Gs, really quite gentle,” announces Henry, as though over twice the Earth’s regular gravitational pull is no big deal at all.

I nervously laugh my consent, and we’re off.

Surprisingly, the centrifuge spins at what appears a relatively low speed of between 40 and 50 mph. But as you’re spinning on a fixed axis, it’s the length of the arm, not the speed of rotation, that’s key to triggering the G-forces. And as this arm is 30 feet from the central point, it’s pretty gnarly. 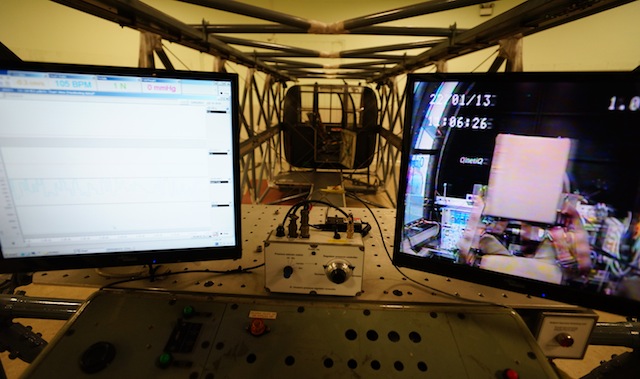 2.8Gs turns out to be a fairly comfortable ride, if you consider hitting one of the more extreme turns on a roller coaster and sustaining the effect for 15 seconds “comfortable”, that is. The cockpit itself rests on a pivot, and as the centrifuge gains speed it swings outwards, effectively laying you on your side as the arm spins. When it comes to a halt you rock back into place, tricking the brain into thinking you’re falling over a cliff. Here’s the point where most people hurl, but my cunning “no pre-centrifuge breakfast” plan seems to have paid off. I’m ready to take it to the next level.

Henry cranks it up to 3.2Gs, and it’s again not too bad a ride, all things considered. But the next run, pulling 3.6Gs, feels very different. As soon as the gondola swings outwards, my vision goes crazy, as though two yellow spotlights are swamping what I can see from my peripheral vision and moving in towards the centre. During the safety exercise that kicked off the day I was told that such symptoms were the first sign that a test subject is losing consciousness, that enough blood isn’t making its way to the brain, and that to reverse the process I would need to push down hard with my legs and feet on the pedals in the cockpit, which in doing so will tighten the muscles surrounding blood vessels and send oxygenated blood shooting back towards the head.

It’s at this point that I remember the words of a pal who I spoke to when I first found out about the centrifuge trip: “You know, you’re more likely to crap your pants than to throw up on a centrifuge.” Suddenly, the idea of tensing the lower part of my body doesn’t sound like a good idea.

But with the curtain over my vision falling faster than the one over Jimmy Saville’s once-illustrious career, I push down hard on the pedal at my feet. After a slight delay, my vision spreads out once again, and what feels like the weight of a sumo wrestler is applied to my body.

I’m laughing, but not sure quite why; this is probably the most uncomfortable experience of my entire life, and yet I’m giggling like a school girl who’s just been DM’d a naked picture of Justin Bieber by the man-child himself over Twitter. I draw the conclusion that a love of teen pop must correlate with a lack of blood going to the brain.

“The sensors in the pressure pedals at your feet tell me you were exerting a moderate-to-high level of force there to stay conscious,” says Henry. “Are you sure you want to continue?” 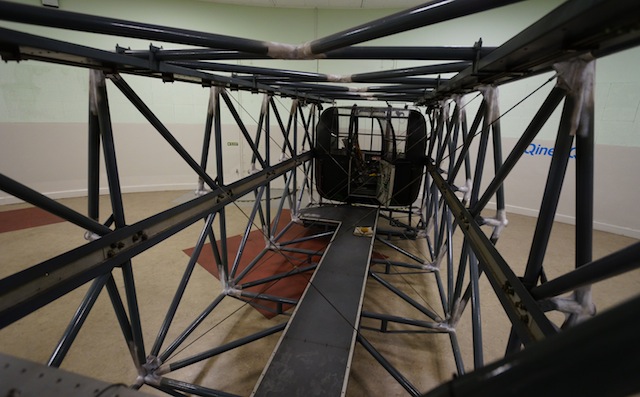 “Yeah go for it,” I say, a sentence I now realise was not uttered by me, but by a version of myself whose brain had been rattled by three sharp, sudden bursts of hypoxia.

My final run begins, and we hit 4G. It’s bloody horrible; the skin of my face is stretched taut against my skull, my head feels as though it’s being squeezed through my neck and down between my shoulders, my vision is warping almost instantly and no amount of “moderate-to-high” force from my legs is bringing any relief.

“It’s going, I’m losing it,” I say like doomed pilot during the Death Star trench run. But before Henry even has the chance to stall the centrifuge, the 15 second spin is over.

4G! Not quite enough to make me the next “Iceman” – serious fighter pilot hopefuls need to maintain control during G-force periods in excess of 7 or 8Gs, sometimes even higher. But it’s a fair sight better than Top Git Jeremy Clarkson managed, who bailed out before hitting 3Gs.

A fun, if reasonably unpleasant experience then, the sort of thing I’ll be in no hurry to go through again any time soon, but one that I’ll recount with the sort of nonchalant cool to anyone within earshot (ever, forever) that a grown man only gains after narrowly avoiding soiling himself in front of a room of his peers.