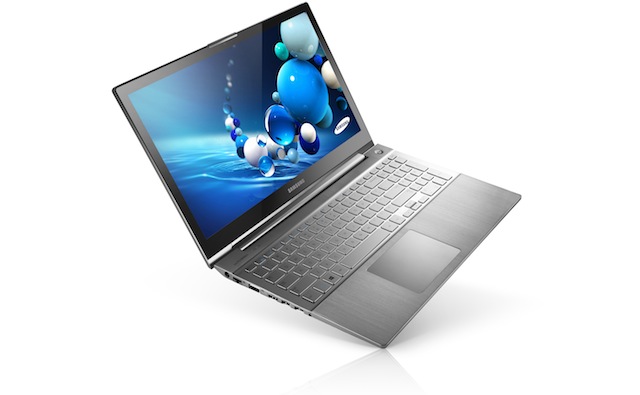 With whispers of an advanced 4K TV set dominating Samsung’s pre-show CES 2013 news, the company has felt it prudent to push a few of its smaller launches out ahead of the mania of next week’s exhibition opening. It’s Samsung’s Series 7 laptop range leading the charge as Samsung prepare for the Vegas blowout.

First up is the Samsung Series 7 Chronos, an updated version of a 2011 machine. It comes packing a 15.8-inch Full HD 10-point multitouch touchscreen display and quad-core i7 processor, 2GB dedicated AMD graphics and 8GB RAM, making it quite the workhorse.

The Chronos also features RAMAccelerator software (which claims to give a 150% speed boost when activated) and a 1TB HDD, with a full size keyboard squeezing in an increasingly rare numberpad into the laptop form factor. 11 hours of battery life are promised, with JBL speakers delivering the sonics and Windows 8, naturally, onboard as the OS.

If a slimmed down machine tickles your fancy more than beefy specs, the Samsung Series 7 Ultra ultrabook will pique your interest. Smaller at 13.3-inches in size, it’s screen is brighter than the 300-nit Chronos’s at 350 nits, while retaining the 10-points of multitouch. An 8 hour battery life is promised, with a choice of Core i5 or i7 processors and a 256GB SSD making up the innards.

No pricing has been revealed for either machine at this point, but you’re definitely looking at computers occupying the premium end of Samsung’s pricing scale.