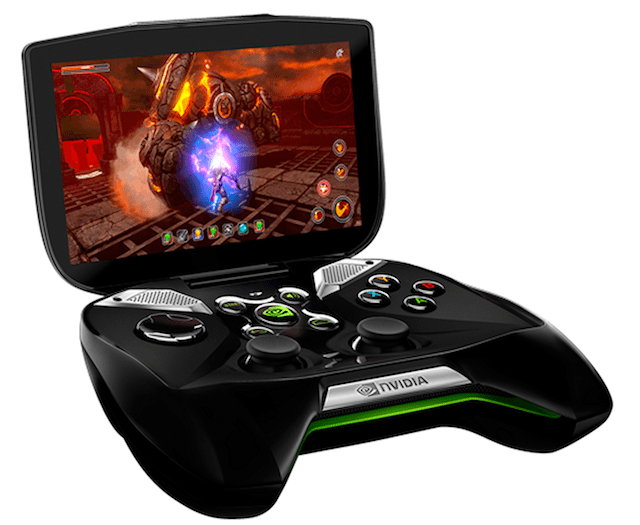 Straight out of left field, graphics chip manufacturers have caused an early stir at CES 2013 by announcing the Nvidia Shield, the company’s first attempt at a gaming console. And it’s sounding a pretty special bit of kit indeed.

An all-in-one game controller that doesn’t look unlike an Xbox 360 controller, the Shield is powered by a Nvidia Tegra 4 chip with a HDMI port on the bottom for hooking up a HDTV, while a 5-inch 720p touchscreen display can also be attached directly onto the controller for a portable experience. Running Android Jelly Bean, there’s also microSD expansion for storing games on, as well as audio out and a 3.5mm audio jack. Nvidia claim the built-in speakers will rival the likes of a Jambox, while the internal batteries are good for 5 to 10 hours of gameplay, depending on usage

Things get really interesting with the Shield’s PC gaming capabilities. PC gamers running Windows 7 or 8, with a Kepler-based graphics card (GTX 650 or GTX 660M or higher) can stream games running on their powerful desktop rigs directly to the device. Essentially, it’s putting Skyrim and Far Cry 3 in a handheld, and meaning that you no longer need to lug your heavy gaming rig around the house if you want to put games on a big living room screen. Steam’s Big Picture Mode was shown running on the device, and Nvidia promise that all games that include controller support should work fine.

Other requirements for PC game streaming include at least 4GB of system memory, a Core i% processor or more powerful and an 802.11/a/g/n router. With all these in place, you should be able to game with “ultra-low latency”, say Nvidia.

As a native Android device, all regular Android functionality, including web browsing, video streaming and music playback are possible, making the Shield a decent media centre replacement too.

Really exciting announcement from Nvidia, who are looking set to have a really great CES 2013 showing.