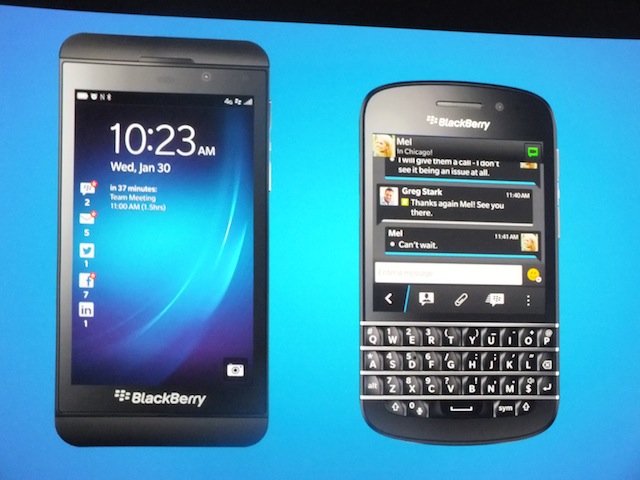 Today’s event saw the two handsets’ multitasking capabilities showcased. A “BlackBerry Peek” feature allows users to check incoming notifications while another app is running, activated by a gesture that allows switching on the fly between applications that run simultaneously rather than pausing or being virtualised in the background.

The Z10 and Q10 also make use of the “BlackBerry Hub” feature, a unified inbox for all notifications and emails in one space, keeping social networks and secure email messages pushed to the handsets in real-time. There’s no need to launch individual messaging apps to grab new messages on the handsets – all are continuously updated and automatically retrieved (a potential battery drain if it’s not an optional feature).

BlackBerry claim the Z10 also has an industry-leading touch-keyboard, letting users “flick” words to the screen that appear as predicted text suggestions, with a swipe-down gesture bringing up symbol keys.

“BlackBerry Balance” features on both the Z10 and Q10 allow users to keep personal and work profiles on a single handset, with security features protecting potentially sensitive files on the work side.

BBM (BlackBerry’s own instant messaging service) also gets an update on the BB10 devices, allowing for video calling direct from the messaging app. There’s also “BBM Screenshare”, allowing users to share in real-time what they are viewing on their own BB10 handsets with fellow BB10 users, similar to a PC’s remote desktop sharing apps.

“BlackBerry Remember” acts as BB10’s own built-in note saving service, similar to Evernote (itself integrated into the feature), allowing for photos and voice notes to be saved, as well as sharing files from native BB10 apps (such as browser bookmarks and flagged emails).

The handset’s camera functionality looks particularly interesting thanks to the “TimeShift” feature, which records multiple images across a number of seconds, letting you slide between the shots in motion, allowing you to select the exact moment you want to save as a still. Built-in image editing with crop functions and image tweaking controls are also built in.

“BlackBerry Story Maker” lets users blend multiple media files (including videos, pictures and music) together, automatically creating a video file with transitions and optional credits from the uploaded files that users can share with friends.

Altogether, the BB10 handsets have access to 70,000 apps at launch, including Kindle, Facebook, Twitter, Where’s My Water?, Jetpack Joyride, Angry Birds and Skype, among other leading applications.

We’ll have more updates on these new handsets as the afternoon progresses, including confirmed tech specs. Keep refreshing this post for more info as we get it.