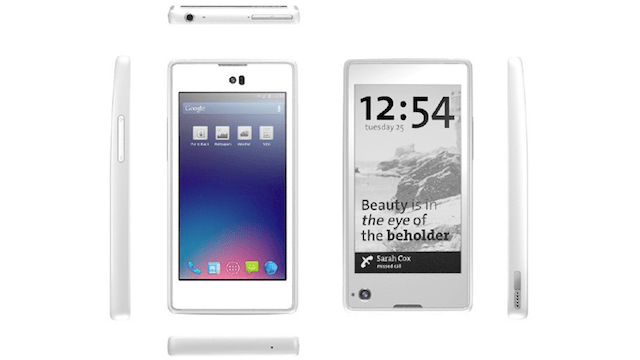 Smartphone design has got a bit stale in recent months. Edge-to-edge screens, ever-larger displays, NFC and the odd boost in camera tech are all to be expected, but all the major manufacturers have more-or-less settled on a winning formula, that of the glass fronted slate. Yota Devices are trying something quite different, and equally quite mad.

They’re putting together a dual-screen Android device, one that features a regular LCD touchscreen on the front, and an E-Ink display on the rear, the sort you’d find on a Kindle eReader.

The idea is that the smartphone will route certain static – or irregularly updating – information to the rear E-Ink screen, which consumes less power than the LCD screen. Yota Devices are claiming that this technique results in a 50% increase in battery life per charge.

Even with this left-field design, the core of the Yota Devices handset looks solid; that LCD screen is 4.3 inches in size (as is the E-Ink screen), with the LCD running at a not-too-shabby 720×1280 resolution. A 1.5GHz dual-core Snapdragon processor powers the show, backed by 2GB of RAM and 32GB of storage. There’s also an LTE connection onboard, while the camera is an impressive 12MP. Even with its two screens, the device is just 10mm thick – which is pretty remarkable if you compare it to, say, an iPhone superglued to the back of a Kindle.

There are still plenty of questions to be answered about a device which, until very recently, was thought to be just a prototype and not an actual product. But with Yota Devices aiming for a Q3 2013 launch, we may eventually have a chance to get our heads around this intriguing concept with an actual device in our hands.