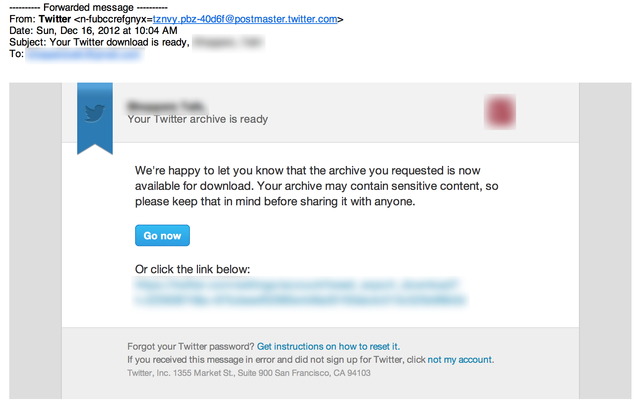 Twitter CEO Dick Costolo promised that users would be able to download their entire archive of tweets before the year was out, and for a small group of Twitter fans, that functionality is now accessible.

A handful of Twitter users are now reporting that they’ve been given the option to download every tweet they’ve ever sent through the service as an emailed ZIP file attachment containing HTML, CSV and JSON files, popping their tweets into a chronological list. The option is accessible through the settings tab on Twitter user’s web profile page, under the heading “Your Twitter Archive”.

Twitter have confirmed that only a “very small percentage” of users are getting the feature initially, and it seems that Twitter’s core community will be getting the new option first. Twitter user Psanta (@Psilosophy) for instance is among them, a prominent Twitter user who helped translate the site into Hindi.

“I helped in translating part of the website to Hindi a while back. So maybe that’s why I was one of the 1st to get it,” he suggested.

It does seem though that Costolo has made good on his promise. Expect all users to have the feature added to their settings page before the year runs out.