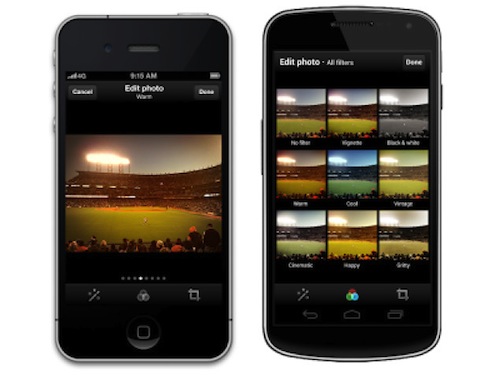 After yesterday removing Instagram support from feeds yesterday, Twitter have finally made good on the rumours that they were creating their own photo filter service. You’ll now be able to edit snaps direct from the Twitter app before sending them out to your followers.

“Starting today, you’ll be able to edit and refine your photos, right from Twitter. The latest versions of Twitter for iPhone and Twitter for Android introduce a few new ways to enhance the images you tweet,” reads the announcement from Twitter.Twitter have called upon image editing experts Aviary to power the tech behind the filters and effects, with a total of eight different styles to choose from.

Users will be able to preview the effects on their snaps in a grid view, swiping through each setting to compare how they look, as well as offering cropping and zoom tools to pick out the best bits of each snap. An auto-enhance mode takes the guess work out of contrast, brightness and colour temperature settings too.

With Instagram now owned by rival social network Facebook, this is the first of what we expect to be many offensive moves by Twitter to maintain their position among the networking elite destinations online.

The new features will be rolling out in an update to Android and iOS users right now.