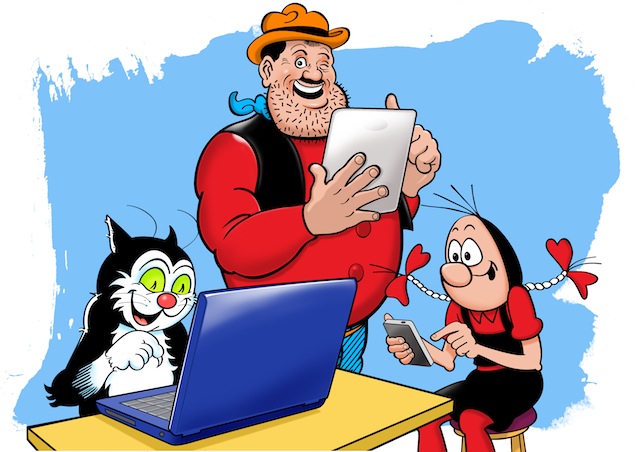 After 75 years as a British print comic, The Dandy today makes the full transition into the digital age, ditching paper altogether in favour of a web-based version of its strips.

Delivered as an interactive, panel-by-panel motion comic, The Digital Dandy introduces interactive elements such as games and digital pets, while continuing the adventures of Desperate Dan, Bananaman, The Numskulls, Keyhole Kate, Blinky and Brassneck, among other much-loved Dandy characters.

Launching first through PC and Mac web browsers, both tablet and smartphone editions are said to be in the works. Rising costs of printing the paper version in the face of falling sales forced the hand of publisher DC Thomson to make the move.

“We all know how popular digital devices have become with children so we’re drawing on our traditional heritage and updating our product to make it relevant for today’s children,” said Craig Ferguson, Editor of the new Dandy.

“With this weekly digital edition, The Dandy is once again blazing a trail by launching a unique, interactive, motion comic. We’re giving The Dandy a whole new dimension and bringing a new lease of life to our characters.”

The last ever print edition of The Dandy also hits newsstands today, guest starring Sir Paul McCartney, with The Beatles bassist fulfilling the 50 year ambition he revealed in an NME interview way back in 1963.

Visit www.dandy.com to to check out the new-look comic. Today’s “Issue Zero” is available free. Each issue going forward will cost £1.99 with an extra £1.49 needed to access the weeky standard content package update for the full experience. Subscriptions cost £85 a year, with a year’s worth of content packages costing £29.99.