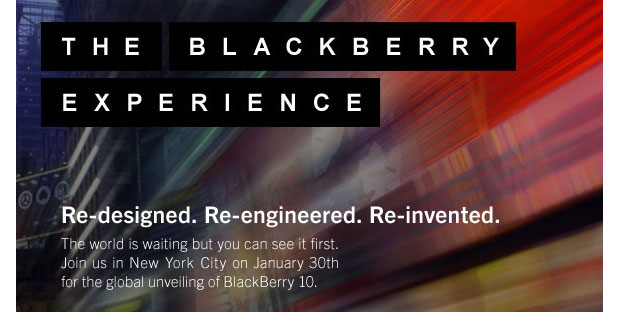 It’s been a long time coming, but RIM are finally ready to lift the covers off their long-awaited BlackBerry 10 smartphone refresh.

The Canadian mobile manufacturers will be hosting a big launch bash for BlackBerry 10 in New York on January 30th, with invitations hitting the desks of US media today.

BlackBerry 10 is seen by many analysts as the last hope for RIM’s smartphone business. Though the company dominated in the early days of web-connected mobile technology, RIM failed to keep the pace with the app-driven revolution of Android and iPhone. Early indicators suggest RIM are on the right track, but whether it’s too little too late for the brand remains to be seen.

We’ll offer our thoughts on the new RIM tech come January, when we’re expecting to be able to go hands-on with BlackBerry 10.