A top-down spaceship resource management strategy sim roguelike, with retro visuals and a punishing difficulty level can’t possibly be fun, right? Wrong. Find out why the latest indie hit, FTL – Faster Than Light, is one of the most unlikely contenders for game of the year in our full review!

Halo gives you the space gunfights. Mass Effect gives you the sweeping space-opera story. Dead Space gives you soiled underwear. Each offers a slice of life on Mars, but none have really managed to capture that feeling of captaining a starship, of becoming a Kirk or a Han Solo.

If you want that experience, look no further than Faster Than Light. An unlikely contender for game of the year, this sci-fi strategy sim is as addictive as they come. 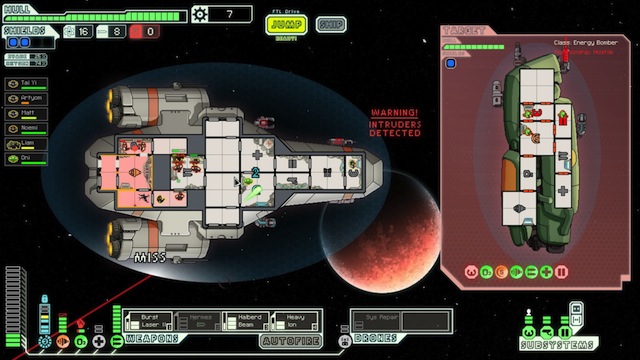 At first glance, it’s difficult to see how an indie title like FTL could possibly sit up there with the esteemed triple-A sci-fi games mentioned earlier. Viewed from a top-down perspective and with simple (but positively charming) graphics torn out of the 16-bit era, it initially seems like a relic. But this visual simplicity belies one of the most challenging and rewarding experiences to have come from the indie scene in years.

You’re tasked with captaining a small starship on a suicide mission to deliver information vital to your federation’s fleet from one side of the universe to the other, all the while being constantly chased down by a rebel fleet intent on sending your ship to the scrapyard in the sky. To do this, you’ll have to carefully manage the power resources of your ship, making sure that systems controlling oxygen, shields, weapons and engine drives are in tip-top condition, putting your small crew to work on damaged areas of the ship and manning key systems, and avoiding the many potential disasters that await your ship at every turn.

There are hundreds of tiny details to control at any one time on your ship, from oxygen levels to fuel meters and weapon charge. On paper it’d seem mind-boggling to micromanage, but the key to Faster Than Light’s success and addictiveness is how well presented all these interlocking systems are, and how simple it is to control them. A clean, uncluttered interface puts basically every control onscreen at once, and a simple left or right click sees you power down or power up specific sections of your ship, or assign tasks to crew members. Hovering the mouse over each control shows which part of the ship it is associated with, and there are plenty of visual cues as to what effect each decision will have on the craft; for instance, opening the exterior blast doors will put out any fires on your ship, but will cause a vacuum sucking out oxygen, highlighted by rooms turning red, an O2 meter descending and your crew flashing. It’s masterful how developers Subset Games have created such a simple visual feedback system for so many potentially complex concepts. 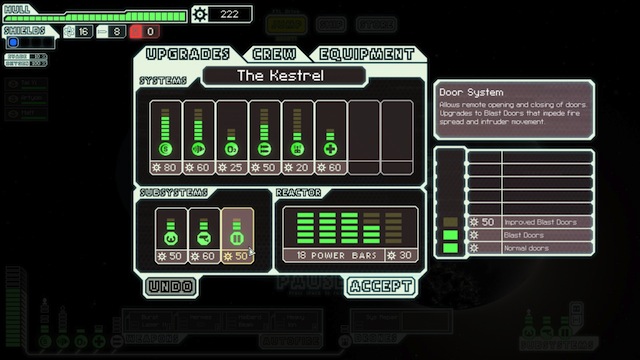 Once you’ve got the hang of all the controls and ship details on offer, you’ll quickly be jumping around the galaxy map, littered with stop-off spots, each connected by a web of travel lanes (a bit like a tube map) and each offering unique encounters. The aim is to progressively push forward towards your fleet’s position by reaching an exit marker on each map, upgrading your ship along the way to better defend against potential threats along the way. To do so, you’ll have to first best all manner of exhilarating sci-fi tinged encounters.

Moving from one zone to another may find you landing in the middle of an asteroid belt, being pummelled by debris while your crew race to the engine room to power up a speedy jump to the next sector. Or perhaps you’ll come across a desolate space station issuing a distress beacon, only to realise too late that it is a trap and find your ship overrun by space slugs. With a stripped-back graphics engine, much of the detail to these encounters is delivered via text descriptions, but that in no way lessens how evocative each new discovery can be, nor the allure of potential rewards for your inquisitive nature.

The same can be said for space combat, where victory often results in salvaged upgrades for your ship. While there are no flashy explosions to speak of, they’re intense, fast-paced, and consistently challenging. Again, the fabulous UI works wonders; it’s simple to charge up your weapons and target individual systems on an enemy’s ships, and hammering enemy weak spots whilst keeping your own well defended by your crew is excellent fun. 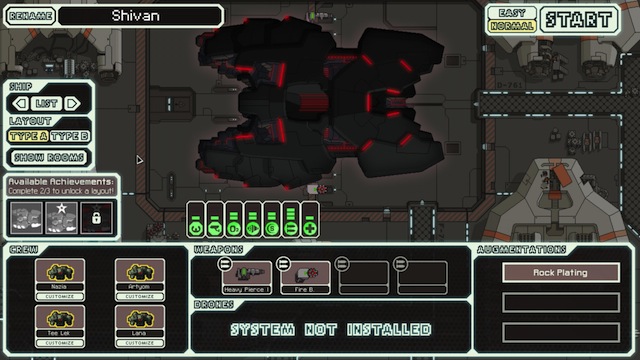 It’s also bloody hard. You’ll die frequently in FTL, and not just at the hands of enemies with ships packing twice the arsenal of weaponry at your disposal. Each encounter, however seemingly innocent, brings with it the possibility of endangering your crew and ship. Taking on a crazed refugee from a burning carrier could see him wipe out your entire crew just as easily as he could prove to be an invaluable asset to recruit to your team. Entering into an agreement to trade resources with a merchant could see them scarpering off with your goods before delivering their half of the bargain, leaving you for dead, or on the flip side could see you bagging a high-powered fire beam to strike fear into the hearts of the space pirates you’ll frequently encounter.

The challenge is stiffened further by the game’s permanent death mechanic. Sure, you can save the game and return to your adventure at a later date if you need to take a break, but once that ship falls foul to a nasty space death, it’s game over. No going back to an earlier checkpoint, no re-loading a previous save. That crew is wiped out, forever to haunt the void of FTL space.

This may sound frustrating, especially in its frequency, but it really isn’t. FTL masterfully manages to pull gamers into an addictive cycle using two tried-and-tested techniques.

Firstly, games are almost uniformly short; you’re unlikely to last much more than half an hour or so during most games, and even “beating” the game takes at most a few hours. Die, and you’re back in the game within seconds, ready to explore space all over again. 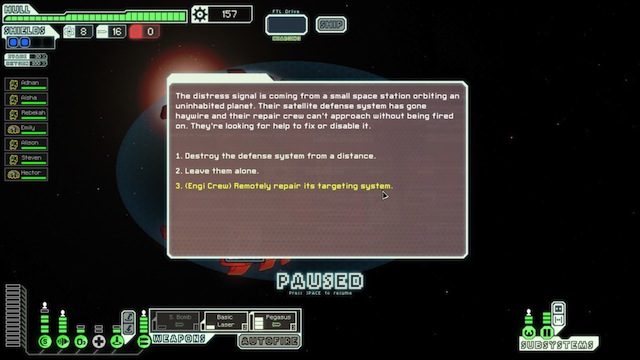 Secondly, the randomised nature of each galaxy. Every new game puts you in a whole new portion of space, totally different to the last. You may start off next time with a winning streak of easy battles against weakened space pirates, leaving you armed to the teeth and ready for whatever challenges await. Or you may land straight away within an electrified nebula that strips your ship of its shields, immediately putting you in grave danger. This unpredictability is breathtakingly addictive, forcing you to quickly adapt to an ever changing scenario, and meaning you never pine for a recently lost ship as you know even greater adventures may await.

If there’s one area that Faster Than Light stumbles, it’s with the amount of encounters you face. Make no mistake, there must be hundreds of varied events dotted around the randomised galaxies, and with all the variables in play that lead into each encounter drastically affecting their outcome, they’ll never feel stale. But having said that, being a game that so addictively pulls you in for “just one more go”, you’re likely to read the same text descriptions repeatedly over the course of your time with Faster Than Light, and encounter the same baddies and scenarios time and again. There’s plenty to face, but we’re hoping that further updates to the game expand the amount of events even wider so that we can continue to squeeze every last drop of fun from this game for years to come.

Faster Than Light is one of the most satisfying gaming experiences to be had this year. It doesn’t court you with stunning visuals, nor does it hold your hand through a consistently challenging adventure. What it does offer however is a remarkably rewarding, fiendishly addictive game that manages to make myriad systems and stats accessible and, most importantly, fun, through a superb UI and charming design decisions. Showing why the indie scene is currently the haunt of some of gaming’s finest ideas (and also just why crowd-funded titles could well be the antidote to the flow of boring gaming “blockbusters”), Faster Than Light should be on every gamer’s computer.