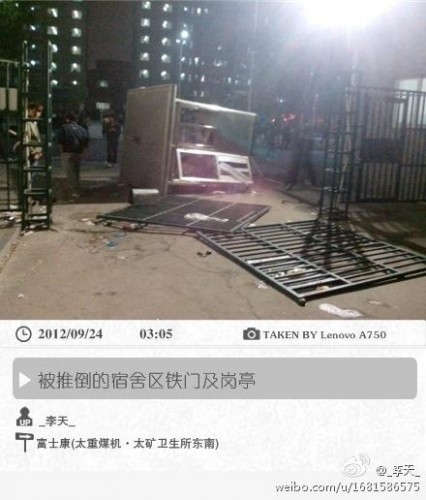 A mass brawl has erupted at the Foxconn manufacturing plant in China, involving roughly a whopping 2,000 workers and causing injuries to 40 people. Foxconn state that Sunday night saw a “personal dispute” quickly escalate out of all proportion at their Taiyuan plant, with a disagreement involving workers and a restaurant owner the root of the violence.

In order to help police with their investigations, Foxconn have halted production at the plant, which will also give workers a chance to cool down after the fighting. Photos snapped onsite show damage to buildings and equipment, though Foxconn have yet to reveal what repairs need be made.

More importantly, Foxconn have yet to reveal which products they manufacture will be affected by the production blip. iPhone 5s, which are already expected to experience shortages, are made at Foxconn plants, though analysts are suggesting that Nintendo’s Wii devices are mostly likely affected.

Foxconn have come under regular media scrutiny regarding working conditions over the past few months, with multiple suicides having been reported at the live-in factories they run.