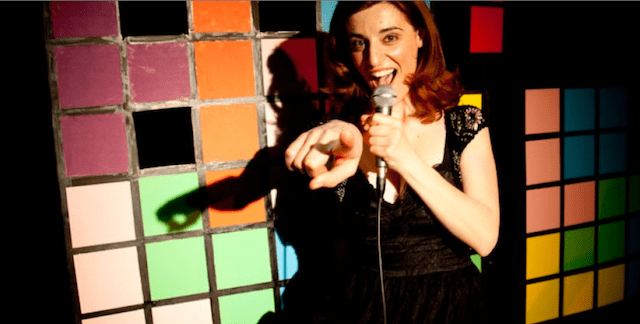 The Queen Geek of cabaret, Keira Daley is set to take the Edinburgh Fringe festival by storm this year with her show LadyNerd. An infectious mix of tech anecdotes, wit and belly laughs, LadyNerd sees Keira join forces with musical director and piano geek Mark Chamberlain (Jersey Boys, The Last Five Years, Mornings With Kerri-Anne), in “an unashamedly brainy celebration where jazzy piano bar meets Sega Megadrive”. In this exclusive guest post, Keira talks us through the rise of the nerd, and some of the incredible women over the centuries who’ve made it possible.

I discovered my nerdy identity – or ‘nerdentity’, if you will – at a very young age.

I was five years old when my big sister brought home a mangled aquamarine coloured box with the word “Tempest” on it. It was adorned with screenshots of games – the only one I remember clearly is Pong, though it may or may not have been called “Bat ‘n’ Ball” for copyright reasons.

This is my earliest recollection of a computer.

Somehow, I worked out how to hook it all up, tune the TV to it (an old wooden box CRT – yes, I’m a child of the ’80s), and get it running. Thus began my reputation as “person who knows how to make the gadgets work” (which is a somewhat less shiny title than “engineer”, “programmer”, or “techspert” – I am just a stage performer after all).

The Tempest was already old for its time – this was Atari’s heyday – but it was pretty amazing to me. You press a button on a stick attached to a wire, attached to a dusty slab of a console, attached to a behemoth of a TV, and you can make things happen on the screen half a metre away. Incredible!

Fast forward to the early ’90s. We had an Amiga 500. I shouldn’t really say “we” though because I was the only one who used it (imagine a household now where only the 10-year-old uses the family PC…). Needless to say, it was a beautiful, exotic device at the time. Of course, it involved the somewhat less beautiful task of swapping floppy discs every time you wanted Willie Beamish to “Take backpack”. But I loved it all the same.

Nowadays, we expect computers to be there at every turn, doing our bidding. It’s hard to imagine life without mobile phones, let alone life without so much as a calculator. Strangely enough, in 1842 Ada Lovelace knew this is how things would go down before the first computer was even built. After learning of Charles Babbage’s purely theoretical Analytical Engine, Ada felt mathematically inspired enough by the idea to write it an algorithm – a nerdy kind of love letter to a phenomenon she’d never live to experience.

This is what nerds do best – they embrace ideas.

History’s greatest nerds have committed wholeheartedly to theories that others often overlook or dismiss. Had Marie Curie followed the pack, she’d never have discovered the true nature of radioactivity. Okay, so she also mightn’t have been poisoned to death by radiation, but sometimes you have to take the bad with the good.

Meanwhile, Florence Nightingale’s obsession with hygiene cut the death rate of wounded soldiers almost by half using two powerful tools – meticulous medical records and a little thing we call hygiene. Washing hands saves lives, who knew? I’d quite like a Florence Nightingale hologram next to the sinks in every public toilet, complete with pie charts (which she invented), explaining why a clean hand is better than a gross one. I’d probably go to high-five her every time, but my hand would sweep through and hit my own hand in the mirror.

And, damn it, why shouldn’t we high-five ourselves? In an image-obsessed world, rife with inane pop cultural phenomena (not to say it’s all bad, of course – there’s some amazing TV around) nerds are the people restoring the balance. Nerds are the ones who reflect and redirect. Nerds make discoveries, they cure diseases and solve problems. They investigate, question, and research until the job is done. In other words, nerds do stuff.

“Nerd” is not a dirty word. If you are a nerd, you should wear it as a badge of honour considering your predecessors. And if you’re not… isn’t it time you joined us?

Keira Daley is a writer, performer, and life-long nerd from Sydney, Australia. Her award-winning cabaret Keira Daley: LadyNerd is appearing at Edinburgh Fringe 2012 every day 5.20pm at George Square Three.