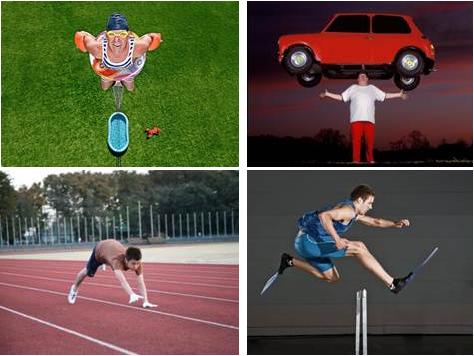 While this summer will be dedicated to gold medallists at the pinnacle of mainstream sport, Guinness World Records aren’t going to let us forget that there’s a kookier side to sport out there too. They’ve today released the eBook-only Totally Bonkers Sporting Champions tome, celebrating some of the stranger records they bear witness to every day.

Those making the cut for the book inlcude Japan’s Kenichi Ito who recorded the Fastest 100m on All Fours in an astonishing 18.58 seconds (just 9 seconds longer than Olympic sprinter Usain Bolt) and Darren Taylor, a.k.a. Professor Splash who broke his own record for the Highest Shallow Divefrom a height of 11.20 m (36ft 8.94 in) landing into just 30 cm (12 in) of water.

“It’s all very well being a professional athlete, but what about the pea-shooters, toe-wrestlers and haggis-hurlers? Who gives these passionate sporting heroes the credit they deserve?” said Guinness World Records Editor-in-Chief, Craig Glenday.

“Thankfully, Guinness World Records is here to congratulate and celebrate these unsung heroes of the track, field and bog.”

The eBook also represents an exciting new stage in the publishing of Guinness World Records. Though they’ve dabbled in apps and digital publishing in the past, this is the first time the record watchers have put out a digital-only edition.

“It enables us to be much quicker, responsive and timely with our product” said Frank Chambers, Guinness World Records VP Publishing.

“We’ve been keen to explore the treatment of our records, and a specific topic, in a more narrative way and the short-form version of e-books is perfect for this.”

The book is available now from all good digital bookstores, and some rubbish ones too.