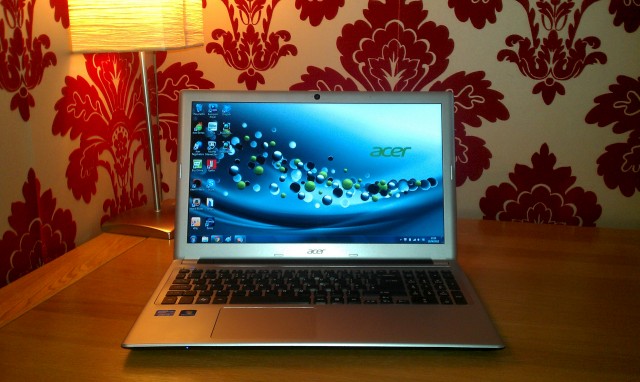 Price: From £349 depending on configuration

Acer’s mid-range V5 series shuns the slim-line appeal of ultrabooks for full-fat notebook looks instead. Packing a Core i3 Sandy Bridge processor, does it hit the price/performance sweet spot? Read on to find out!

Acer’s V5 series is a busy one, with multiple configurations starting at £349 and rising several hundred pounds for the top spec gear. Our 15.6 inch review model sits firmly in the middle of the range, boasting a generous 8GB of 1333MHz DDR3 RAM, but paired with a relatively lowly Intel Core i3 1.4 Ghz 2367M Sandy Bridge processor that supplies the Intel HD 3000 Graphics. That should see you finely breeze through HD video playback, general Office functions and browser based gaming, but won’t offer the clout for comfortable modern 3D gaming, or intensive Photoshop or video editing.

The V5 makes use of Acer’s Instant Connect web feature, which sees you quickly get online within seconds of Windows loading up. Boot up times are significantly lower (45 seconds to get into Windows 7), due to the machine using a 500GB HDD rather than the speedy SSDs that are being rolled out increasingly with the growing ultrabook trend. That’s a reasonable amount of storage space though, and more than enough for a sizeable MP3, photo or video collection. 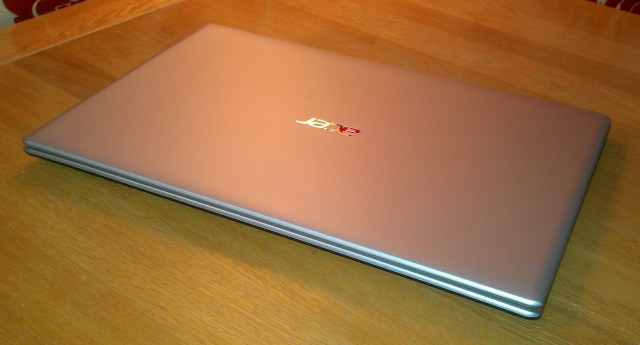 The laptop as a whole shuns super-slim millimetre chasing for a bulky, but attractive, design. A mix of brushed silver aluminium and plastics give a premium look to the machine, only let down by its chunky measurements, lining up at 380mm x 251mm x 24mm. It’s not massively weighty for a laptop of this size (and one that makes no illusions as to being an ultrabook contender), but will put a strain on any shoulders that have become used to a lightweight netbook.

The extra space offered by the sizeable dimensions do mean you get a reasonably wide array of port options, with a full size HDMI port on the left hand edge alongside two USB 2.0 ports and a single USB 3.0 port, as well as a headphone/mic jack. There’s also an SD card reader on the front edge of the laptop, so deftly hidden away that we initially couldn’t find it. However, there’s no onboard Ethernet or VGA sockets; instead, a supplied adapter connects to a bespoke port on the left hand side of the machine offering optional expansion for these extras. It’s a strange workaround (the size of the laptop seems more than capable of accommodating both ports without an add-on), but at least you’ve got the option if you need those connections.

Also included is the increasingly scarce optical drive. An 8x DVD RW, it surprised me how much I actually used it during the review period, considering I live without one with no problems on my personal machine. Maybe it’s too early to write off this “legacy” technology after all. Dolby Advanced Audio stereo speakers are clear and reasonably detailed for DVD or audio playback, but do lack the bottom end punch you’d hope for from a beefy machine.

Battery life was quite disappointing. Though pushing the system to its limits with the Battery Eater test (Wi-Fi, a 3D OpenGL model loop, full brightness), a fully charged juice pack lasted just 106 minutes before popping its clogs. It was a fairly intense load we put it under, but had hoped for a little better. You’ll need to keep this laptop near a wall socket, though its general lack of portability means that probably won’t be too much cause for concern. 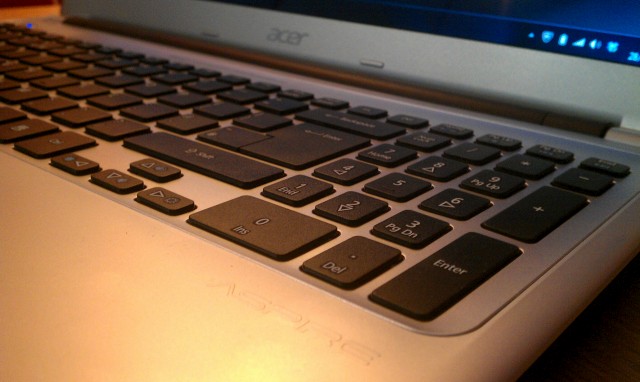 A fair bit of bloatware has also made its way onto the machine. In fairness, the footprint is relatively small as most our desktop shortcuts to web links (eBay, Netflix) and are useful resources, as is a pre-installed Skype installer. However, we like our fresh Windows load to be clean, and would rather not have a heavily populated desktop from the off.

What is more of a concern though is the keyboard. Though the chiclet keys are of a decent size and well spaced, we found the travel so slight that typing at speed took a little practice. We also had issues with a sticky, noisy “Q” key that got stuck against the chassis a fair few times during testing. It was nice however to have a dedicated number pad on the right hand side, all too often left out of similarly sized machines.

Likewise, the screen on offer here left something to be desired. Despite being 15.6 inches in size, its maximum resolution is a lowly 1366 x 768, while brightness levels felt low even at full whack. Viewing angles are decent and contrast levels offering fairly deep blacks too, but an overly glossy panel makes viewing the screen in direct sunlight a bit of a chore.

But worthy of praise is the excellent track pad. Nice and big at 5-inches diagonally, it was responsive to the touch and to the tap, and made the (admittedly limited) multitouch gestures of Windows, such as two finger browser scrolling, very easy to get on with.

The Acer V5 won’t turn heads, being too bulky overall despite an attractive silver finish that manages to avoid getting too grubby. It’s inexpensive and handles general word processing and browsing duties with ease, making it a good match for students, with the 15.6 inch screen a tidy TV alternative. However, try anything more ambitious and the laptop’s shortcomings come to the fore.