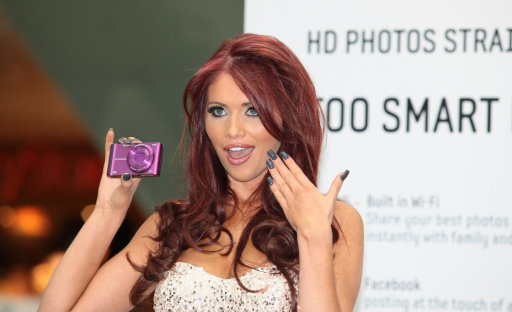 Samsung have launched their new SMART camera range at a glitzy press event at the Westfield shopping centre in East London. Front and centre was ex-The Only Way Is Essex’s Amy Childs, whose implied idiocy was we imagine designed to make the SMART cameras look particularly clever.

Which, in fairness, they already did. Samsung’s NX Series snappers each come packing Wi-Fi functionality that sees pictures automatically uploaded to your PC once in range of a recognised WI-Fi network, and also have built-in Facebook and YouTube uploaders among others, getting your pictures onto your proffered social networks in double-quick time, cable and hassle free.

As for the launch event itself, we’ll call it a “questionable” marketing angle to say the least. Childs posed coquettishly in front of a promotional poster that read “TOO SMART FOR AMY”. Childs may not be the sharpest knife in the drawer, but branding her a bimbo isn’t incredibly inventive, nor an incredibly positive stance for Samsung to be taking. We’d cry “EXPLOITATION” were we not near-certain she got paid shed loads to play up to the stereotype in front of the cameras.