Nintendo’s next gen console, the Wii U with its wacky tablet-like oversized controller, is still lacking an officially confirmed release date despite being announced at the E3 gaming show last summer. Rumours have been circulating suggesting a winter 2012 release date, specifically around November.

Now there’s even more credence given to the November date, following the leak of a memo sent from a Regional Manager at GameStop, which stated that November 18th would be the console’s release date with the store taking pre-orders following this summer’s E3 conference.

Indeed, it fits the traditional timing of other Nintendo console launches, with the Gamecube also launching on November 18th and the Wii on November 19th. It’s also a Sunday, a day favoured by Nintendo for releases.

It all adds up to not a bad shout from the GameStop rep in our opinion. Scroll down for a screengrab of the memo, and click here for our initial E3 round-up on what to expect from the console: 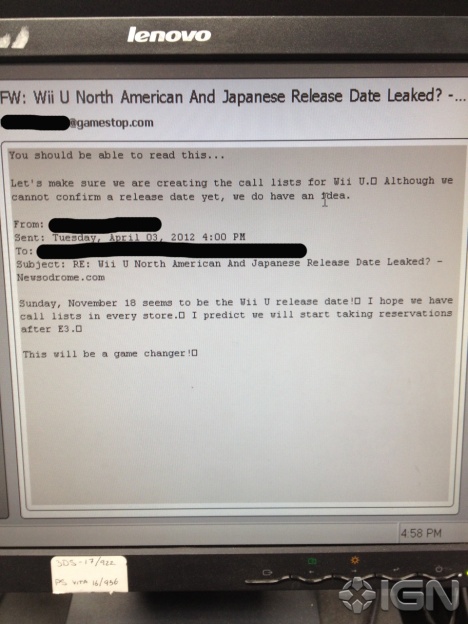