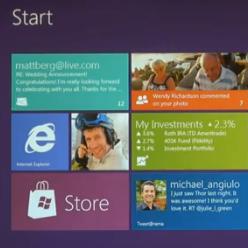 Windows 8 will be avaialble to PC users across the globe from October of this year, according to a new report from Bloomberg.

The report cites sources with a knowledge of the Redmond-based company’s release schedule, stating that work on the OS will be finished by the summer, before releasing in the Autumn.

The timing of the rumoured launch is a wise one; just a few short months before Christmas, the OS will be centre stage in PC and electrical retailers across the land, as well as likely featuring prominently as a headline feature on new laptops released to coincide with the seasonal sales rush.

The operating system update, which adds a tile-based “Metro” UI to the traditional desktop set-up, as well as a keen focus on touch-enabled devices like tablets and smartphones, was announced almost a year ago, and has been available in a public preview form for nearly a month.

The touch-focus isn’t the only bold new move by Microsoft. Windows 8 also represents the first time Microsoft have embraced ARM-based processors as well as Intel ones, with NVIDIA, Texas Instruments and Qualcomm Inc. all working on hardware for Windows 8-based mobile devices.