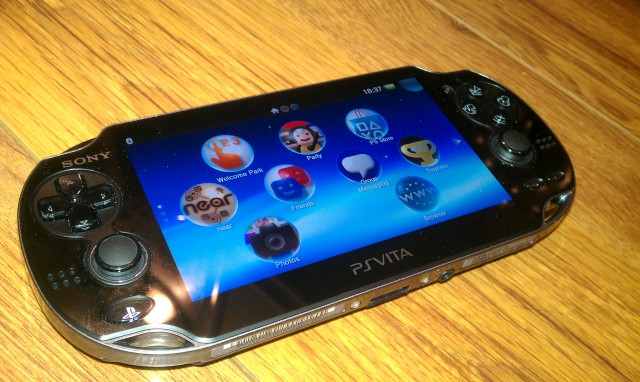 Sony’s long-awaited PSP successor, the PlayStation Vita, is finally here. The most powerful handheld gaming console of all time, there’s no denying it’s a mightily impressive bit of kit. But in this age of tablet and smartphone apps, not to mention having a direct rival in the form of the Nintendo 3DS, is there room for another gaming device in our already stuffed pockets? Read on to find out.

The PS Vita is big. Game Gear big, almost. But thankfully, it’s rarely uncomfortable. Measuring 182mm across, 83.5mm tall and 18.6mm thick, it looks fairly similar to the PSP 1000 model, but scaled upwards slightly. Therefore you’ve still got a black, elongated oval-ish shape in your hands, with two shoulder buttons, a D-Pad, and the four Cross, Square, Triangle and Circle buttons. There are also start, select and a PlayStation-branded home button for jumping out of games or back through menu screens, as well as a modest 0.3MP camera on the front.

The most significant difference from a purely gaming perspective when it comes to design is the inclusion of dual thumb sticks. In 3D games for instance, this means you get control over both your character and the camera, or in a shooter control over both movement and aiming. Though smaller than you’d find on a PS3 controller, they’re responsive, and sit in a comfortable position on the console.

The rear houses another 0.3MP camera, and two small indentations with which to better grip the console. At only 260 grams for the Wi-Fi version and 279 grams for the Vita with 3G added, you’re unlikely to find holding the console over long periods too uncomfortable. That is, barring one new addition; the rear, touch-sensitive backplate. Its uses vary depending on the game played, but we often found our fingers straying onto it unintentionally, triggering actions in-game that we hadn’t wished too. Hopefully many games will make its use optional.

Onto the edges! Underneath, you’ll find the headphone socket and proprietary charging port, which has a USB connection on the other end of its cable for PC file transfer. The top edge has those two shoulder buttons of course, as well as volume and power buttons, and two covered slots, one for Vita game sticks and the other being an accessory port. If you pick up a 3G version, you’ll find a SIM card slot on the side too.

Lastly, the screen. It’s a beauty, measuring 5 inches in size, with full multi-touch capabilities. Being an OLED display, it’s not too massive a drain on battery levels compared to LCD, and is bright and vibrantly coloured no matter what angle you’re looking at it from. Just shy of a HD resolution at 960 x 544, 220 pixels per inch, the Vita still offers sharp visuals. 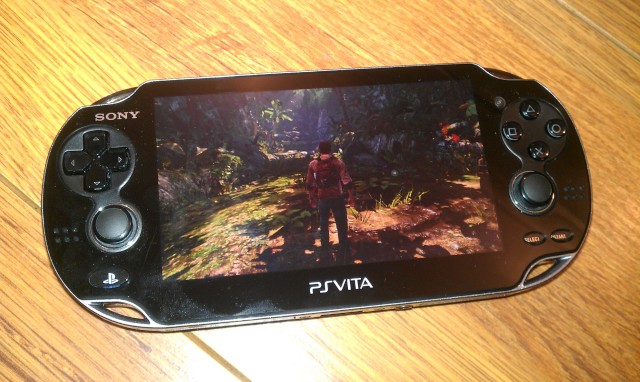 Powered by a quad core ARM Cortex-A9 processor and a quad core SGX543MP4+ graphics processing unit, the PS Vita is a veritable gaming beast. While we’ll leave the specifics of which games look and perform the best for a future feature, needless to say the PS Vita is graphically the most impressive handheld gaming console we’ve ever seen. It blows even the iPad 2’s best efforts (like Infinity Blade 2) out of the water, and even recent 3DS visual showcases like Resident Evil: Revelations can’t hold a candle to the stunning looks of Vita launch titles like Uncharted: Golden Abyss. Speedier games like WipEout 2048 run at a brisk pace, with little or no sign of slowdown. It’s not quite as pretty as a PS3, but the fact that it’s even comparable is mind-boggling.

The Vita is not without its faults though. Loading times, whether pulling your downloaded games from onboard storage or retail sticks, can be lengthy. Again, I’ll state I’m not a fan of the rear-touchpad, which requires insane dexterity to use efficiently. Some may also find the face buttons and sticks a little too small as well. For the most part though, this is an incredibly impressive offering from Sony, who really are giving the hardcore gaming crowd the handheld they’ve yearned so long for.

With all its bells and whistles though, the console still also has lots to offer the casual market. Touchscreen controls and augmented reality gaming through the onboard cameras and gyroscope open up the potential for more casually-orientated games too, not to mention the secondary functions such as web browsing the device offers.

Pretty much every base is covered here, bar one; backwards compatibility. Though you can go back into the PS Store and again grab downloadable copies of your old PSP games, what of your titles stored on UMD discs? Japan have been offered the UMD Passport, allowing gamers register a bought UMD game on your PSP and then download a digital copy to your Vita for a tiny fee. No word yet on a similar scheme for UK users, which will have some Sony fanboys no doubt fuming. 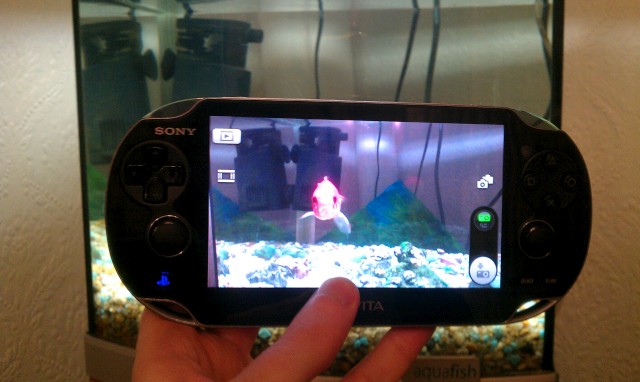 Sony have stuck loyally to their Xross Media Bar for a long time now, and while it’s not a bad interface, it’s more or less done away with in the PS Vita. It’s replaced by a touch-focussed, colourful UI that will look more than a little familiar to any iPad fans. Applications and settings are housed in little bubbles that, while circular, have more than a passing resemblance to App icons. That’s fine in our books; we’d rather a recognisable and intuitive interface that tips its hat to a rival than one that takes an engineering degree to figure out. Multiple screens full of these bubbles can be rearranged and customised through long presses, which will also be familiar to Android or iOS users.

Straight out of the box, you have access to a ton of pre-installed applications on the PS Vita, and even more if you delve into the PS Store application, where you can also download full games and videos.

For instance, you’ve got a multi-touch enabled web browser, that handles navigation and bookmark management as solidly as any mobile browser, Party, Friends and Group Messaging apps for getting in touch with your pals and organising online gaming showdowns, PS Trophies which also sync data to and from your PS3 trophy collection, as well as offerings from the likes of Skype, Twitter, Facebook, Flickr and Foursquare.

Media playback is great too through the Music and Video apps, with the console handling pretty much every conceivable music or video file, as well as the ability to rent or buy movies through the PS Store. The great screen makes it a joy to watch over prolonged periods, and neat features like Scene Search (splitting video files into chapter-like image thumbnails) even gives it the edge over dedicated PMP players in some cases.

Remote Play functionality returns from the PSP allowing you to access content and games stored on your PS3 through your PS Vita’s screen instead. So far it’s limited to select PS3 and Vita titles, and lets you also prepare downloads between your Vita and PS3 while out and about. However, we’ve already seen hacks showing Batman: Arkham Asylum playing on the machine, as well as Battlefield 3, meaning there’s real potential for some mad streamed-gaming abilities here.

When it comes to secondary capabilities, the real let down is the cameras. At 0.3MP, you’re hardly going to be taking shots to with which to fill your personal gallery with the Vita. The snaps captured are fuzzy and lack real vibrancy, and the same goes for videos captured too. 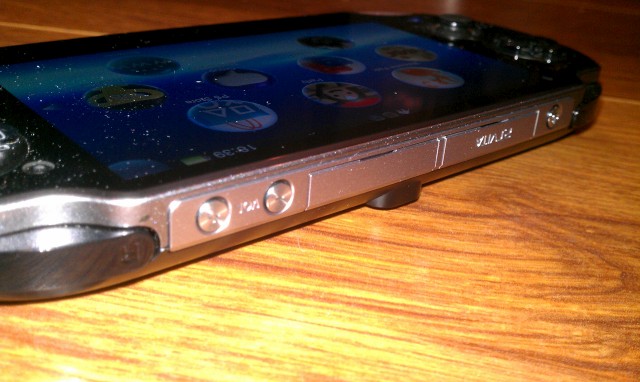 With a giant, bright screen, quad-core processor and Wi-Fi/3G connectivity, the battery life on the PS Vita isn’t all that great. Play a graphically demanding game with brightness levels at full blast and dipping in and out of online play, you’ll squeeze 3 hours at a time out of the console. Scale back the brightness, avoid web connectivity and play through only a couple of songs or movies, you might stretch that towards the 5 or 6 hour mark.

It’s not great therefore, and the sealed battery compartment makes hot-swapping to a spare battery not an option. You’ll also have to wait a few minutes before the console fires up again once it’s been totally drained, even if plugged into the mains.

It’s annoyingly weedy in terms of battery life but, in the Vita’s defence, it is comparable to rivals, with the 3DS producing similar results with it’s 3D screen cranked up, and iPhones and iPods lasting similar lengths of time when pushed to their gaming limits. Tablets, thanks to their larger size and ability to house larger capacity batteries, are the only remotely comparable devices where the Vita genuinely plays second fiddle in terms of playtime. 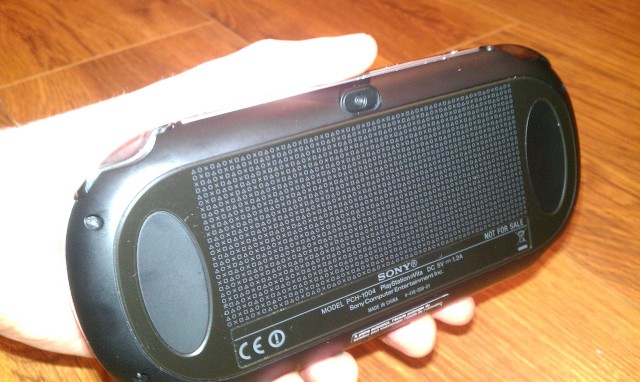 Arguably, the most pressing point of all; is the PS Vita worth your money? Lets take a quick look at a rough breakdown of the costs then.

The Wi-Fi console has a price tag hovering around the £200 mark, with the 3G version closer to £260. If you opt for the 3G version, you’re going to have to shell out for a monthly data plan to go with it, with even the most conservative of plans kicking off at the £10 mark at the very least.

Retail games are fairly expensive, sitting at around £35 a throw, and are similarly priced when downloaded through the PS Store. Without any internal memory, you’re going to have to invest in a memory card should you want to download games or movies. It’s really frustrating, and borderline greedy, that Sony chose to use a proprietary storage format, meaning your SD and microSD cards are no good here. Kicking off with 4GB cards and going up to 8GB and 16GB, even the 4GB cards cost at least £15.

Though there are bundle offers available which run the cost down considerably, you’re most likely going to be shelling out over £300 for a console and a couple of games then. It’s not cheap, but for a hardcore gamer you’re investing in genuine gaming quality here, not mere Angry Birds puff. You get what you pay for, as the old adage goes.

The PS Vita delivers exactly what Sony promised it would; a no-compromises hardcore gaming experience that wows instantly and blows the socks off the competition. It’s the most fully featured handheld to date, with its touch controls, dual sticks, 3G connectivity and plethora of downloadable content and apps, even if some of its features (here’s looking at you trackpad and cameras) don’t shine like they ought to.

It’s not cheap, but get the PS Vita in your hands and you’ll realise that it really shouldn’t be undersold either. It’s a premium bit of kit that delivers a premium experience, at a premium price. Whether or not the masses jump onboard as a result is yet to be seen, but Sony certainly have this reviewer sold.