After a sterling effort with Disneyland: Kinect Adventures, it’s the turn of Pixar’s finest characters to take centre-stage on the Xbox 360. Can lightning strike twice for motion-controlled magic?

Disneyland: Kinect Adventures took everyone by surprise late last year. Though aimed pretty much at toddlers, it provided perhaps the best example of what’s possible with the Xbox 360’s Kinect peripheral, letting gamers use their bodies to explore a nearly-to-scale digital recreation of the Disneyland park, interacting with their favourite characters and playing a handful of well-realised mini-games along the way. It didn’t overstretch the system’s limits, and offered a relatively responsive, fun way for younger kids to immerse themselves in the world of their favourite characters.

Kinect Rush: A Disney Pixar Adventure looks to do much the same, but with a focus on Pixar’s animated heroes instead, featuring characters from Up!, Toy Story and The Incredibles amongst others. 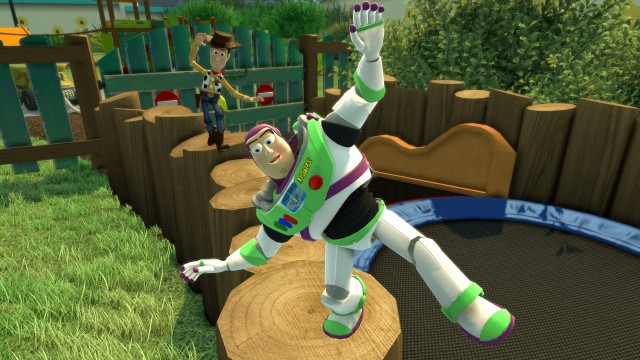 You’ll begin playing by creating an avatar with which to navigate the Pixar world. It’s done here by standing in front of the Kinect sensor, having it take a picture of you and it generating an in-game likeness to play with. It struggled to pick up my 6-foot frame, but when playing with my 5-year old nephew (the game’s obvious target audience) it did a much better job.

After that, your character will be thrust into a hub world, which connects a series of fully-realised worlds based on locations from the movies Up!, Ratatouille, The Incredibles, Cars, and Toy Story. These areas each have a string of missions attached, often putting you side-by-side with stars such as Buzz Lightyear and Cars’ Lightning McQueen. Progressing through missions unlocks further challenges and, in some cases, the ability to play as Pixar’s more familiar characters.

Visually, the game does a great job of capturing the spirit of Pixar’s flicks. Their CGI characters lend themselves well to videogame adaptation, while the backdrops to each mission are totally in keeping with the art style of the movies they represent. It’s faithfully, carefully done. 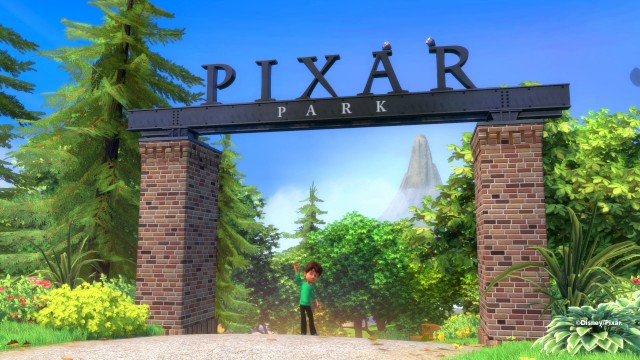 However, things aren’t quite as good in the gameplay department. For starters, when compared to Disneyland: Kinect Adventures’ vibrant hub world, full of interactive elements and Disney characters to meet, the Pixar hub feels sparse. You’ll have little to do except move from mission to mission, and misses out on a great opportunity to have some magical moments of exploration.

It’s a problem exacerbated by the control scheme. Whereas Disneyland: Kinect Adventures developers Frontier had a pretty spot on understanding of Kinect’s limitations, Kinect Rush developers Asobo Studio expect a little too much. To move around, you’ve got to swing your arms in order to move forward through the 3D worlds, turning your shoulders to turn your character, jumping to cause an in-game jump. All too often the motion sensing is marred by lag, or movements being mistaken for another gesture, leading to unpredictable control. 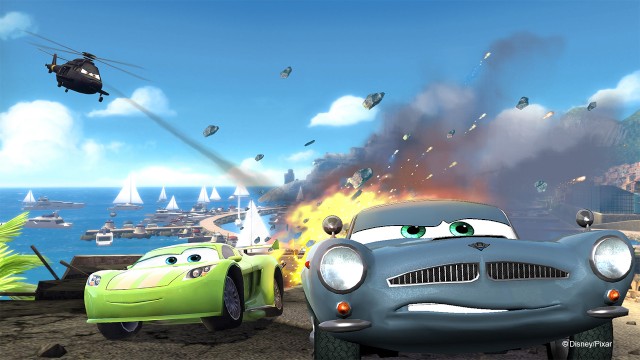 That’s fine when navigating the simple hub world, but with many of the missions based on platforming challenges, accuracy is a must, and accuracy is something Kinect still often lacks. Much of the re-playability of the game comes from chasing new high-scores on these missions, which rely on getting fastest times or high coin collection scores in the predominately platform-based gameplay. But with controls being a little unwieldy, you’re going to be more frustrated than pumped when chasing gold medal ratings.

It’s not all bad though, and when the game turns its attentions towards more casual challenges (alá Disneyland: Kinect Adventures, unsurprisingly) it fares much better. Missions based on the Cars franchise for instance were great, having you hold an invisible steering wheel in front of yourself and turning it to steer the quipping cars. It was much more responsive, and as a result, much more fun.

If you’re looking for a game to keep the younger players in your family busy over the Easter break, you could do a lot worse than Kinect Rush. Like last year’s Disneyland : Kinect Adventures, it manages to successfully recreate the charm of a Pixar/Disney movie on a console. It falls down in its gameplay choices (platforming is ill-suited to Kinect controls), but younger, more forgiving gamers will just be happy to be able to hang out with Buzz and Woody once more.