We’ve all had at least one less than satisfactory cab experience; whether it’s a driver that doesn’t know where your destination is or having to wait an age for a taxi that never arrives, it can be a needless frustration when all you were after was the convenience of a cheap chauffeured drive.

GetTaxi, a cab booking app available for iPhone, Android and BlackBerry, looks to make booking a lift in one of London’s black taxis simpler and more reliable than through any other web-connected booking service, giving full transparency to the user in order to avoid dodgy drivers and excessive waiting times.

When it comes to the software side of things, GetTaxi offers quite a few advantages over the competition. The most obvious selling point of using the service is the ability to watch the real-time movement of your cab when it’s on its way, showing a little image of a taxi approaching your geo-located pick-up position on an embedded version of Google Maps, factoring in traffic stops and other delays. Picking the closest favoured driver in your vicinity through a tailored algorithm, you’ll get an ETA on the cab, and can also send a pick up message with info for the driver (useful for those with disabilities, or perhaps holiday luggage). You’re also sent a notification once the cab arrives at your location.

“It’s a simple way of ordering a taxi. You’ve got full transparency over the way the cab is being dispatched, which takes out the whole rubbish experience of hanging on the line at a call centre, not knowing where your cab is and when it’s going to arrive or pull up outside.” 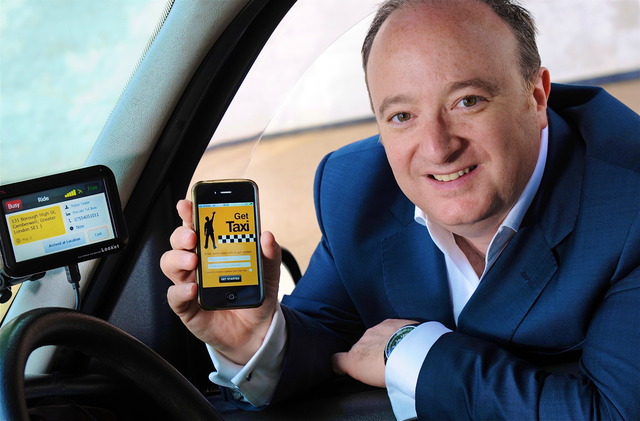 As well as the clever software tricks used, the app offers tangible real-world advantages too; as GetTaxi exclusively uses London’s fleet of black cab drivers, you’re getting a fully licensed chauffeur who has spent around four years building knowledge of London’s tucked away streets. Great, free banter comes as standard, and unlike minicabs blacktaxis can shoot through unoccupied bus lanes. Payments by cash or a card tied to your GetTaxi account can be accepted, which will be handy after a messy night when you’ve lost your wallet or handbag. There are no credit card charges either, compared to other similar services which do pile them on top of your fare.

GetTaxi so far have signed up the skills of over 1,000 London black cab drivers. Get a cabbie that you find particularly friendly or reliable and you can add him or her to a list of favourites (you can add a star rating to each driver), with the GetTaxi algorithm whenever possible offering that driver’s services.

The benefits for drivers are great too. A free, touchscreen GPS module is installed in their cabs, expanding the number of fares they can grab at no cost to themselves. GetTaxi take a small commission from fares picked up through the app, recouping the costs of the GPS unit within a month or two.

“Previously they would have had to spend between 50 and 60 quid a week with a computer cab or radio taxi partnership, subscribing to the network. We only charge them based on the jobs that we get them.”

Growing at a steady rate, GetTaxi have some big name London rivals in their hit-list. Namely, Addison Lee:

“Addison Lee are absolutely firmly in our sights as far as targets are concerned,” said Fullman.

“We’re picking up anecdotally, with every single driver that we speak to re-iterating this, that fares were Addison Lee customers and they’ve now come over to GetTaxi. For starters we’re far cheaper on a shorter journey with our black cabs compared to a minicab, with no minimum charge other than the £3 black cab standard. The cheapest Addison Lee cash fare by comparison is well over £10.”

The service has also had some unexpected benefits for passengers too:

“If you’ve left your iPhone in the back of a cab, we can report historically on all your rides, find out exactly who your driver was, what time of day you lost it, where it may now be, and whether or not the driver picked it up.”