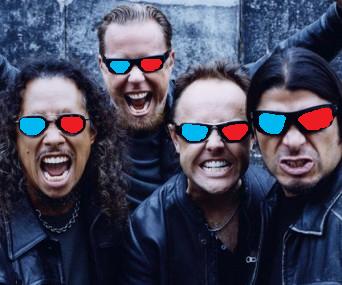 Heavy-metal superstars Metallica have confirmed they are working on a 3D movie project.

Responding to rumours that were circulating on the web, the band stressed that the movie would not be ready until the beginning of 2013 at the earliest.

“We’re here to tell you that, yes, there is indeed a 3D project in the very early stages of production!” said a statement on the band’s website.

“We wish we could tell you more right now, but we don’t have all the finer points nailed down just yet”.

They went on to add: “What we can tell you is that we are planning on being in a theatre near you sometime in 2013 and as you hear us say ever so often, this will be the space for all the details as we finalize them.”

It’s not the first time that Metallica have got in front of the camera’s for a movie. Back during the years 2001 to 2003, they let a documentary film crew follow them around during the recording of their album St. Anger, including many counselling sessions with their on-call shrink.

Fans are hoping that the 3D movie will match, if not exceed, the joy that the Spice Girl’s Spice World brought to cinema multiplexes up and down the land.