Motorola bring their classic RAZR mobile phone range bang up to date with smartphone specs and a super-thin design. In a year of truly excellent Android smartphone releases, is the RAZR a cut above the rest, or in need of sharpening up?

Motorola’s RAZR claims to be the world’s thinnest smartphone. It’s a claim that’s only partly true; while at its thinnest point the phone measures a svelte 7.1mm, a concession has been made that sees a notable bulge sit on the back upper side of the handset allowing it to house the device’s loudspeaker, camera sensor and flash. It’s by no means an ugly bulge, and you could argue that with the slightly brushed surface of the RAZR’s super-strong Kevlar backplate offers a better grip than other smartphones, but it does mean those “thinnest” descriptions must be taken with a pinch of salt.

In fact, with the height and width of the phone measuring 130mm x 69mm respectively, the RAZR actually feels gargantuan. While the overall chassis is perhaps a little too thick around the edge of the screen, there’s no denying that it’s a beauty. 4.3 inches in size, the Super AMOLED, Advanced qHD resolution (960 x 540) capacitive touch screen is as vibrant and colourful as any you’re likely to find. Highly responsive to touch commands, it’s a joy to browse even the tinniest of web links, while videos and photos look a detailed treat.

Making use of a unibody design, you wont be able to replace the RAZR’s battery pack in a hurry, though this is unlikely to trouble many as the phone always performed stably, never once suggesting it would need a hard-reset. Along its contoured edges you’ll also find access to a microSD and micsroSIM slot, microUSB port that’s used for charging as well as cabled file transferring, a mini HDMI port (lead not included) and a 3.5mm headphone jack. 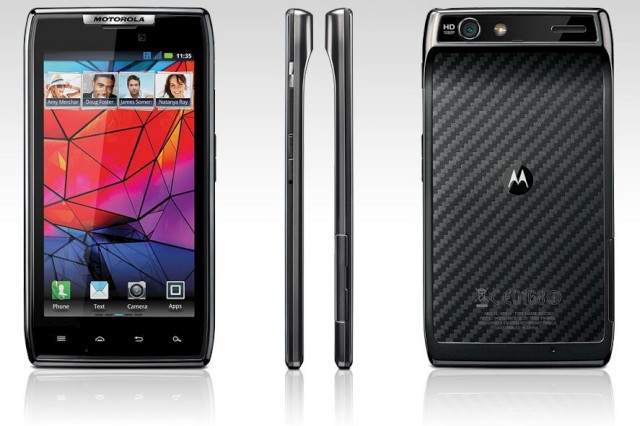 Running Android 2.3.5 (Gingerbread), we were pleased to see Motorola pop all four touch-sensitive control buttons (Home, Back, Menu and the often-missing Search) just under the screen. However, it’s a shame that Motorola have opted to ship with Gingerbread rather than holding out for Ice Cream Sandwich, the latest build of Android.

Having said that, Android here is so heavily re-skinned by Motorola that it almost constitutes a whole new UI in itself. The main draw is the tons of widgets Motorola have thrown in. While the content is familiar (calendars, quick contacts, email snapshots, RSS feeds and the like) the ability to resize them is not. It’s great to be able to shape the widgets placed on the five homescreens to your precise measurements, allowing for a truly customised Android experience.

Perhaps the most interesting aspects of the RAZR though are the Motocast and Smart Action features. Motocast acts a bit like Dropbox, letting a number of PCs or Macs be linked to the phone, allowing for syncing of documents, photos, videos and music across devices. Providing each linked device is switched on, files can be accessed, streamed and downloaded to local storage over 3G, meaning you don’t need to be in range of a Wi-Fi connection to grab the files you need on the go. The Motocast system is built into practically all the major applications of the phone, meaning you’ll regularly see options in the Gallery app or Music Player app to access photos or songs you’ve got stored elsewhere for instance.

Smart Action is a similarly useful feature. It’s basically an app that allows a certain set of pre-determined triggers spark a series of actions on the phone. For instance, you could program the app to note your location, firing up the eBook reading app when you leave work, or launch the email client when at the office, or perhaps set the ringtone volume to silent between your set sleeping hours. It’s very flexible, and has the potential to largely automate many tedious tasks.

It’s not without its faults. 5 homescreens isn’t quite enough and it’s a shame you can’t access quick settings like Wi-Fi and backlight from the drag-down toolbar. But there’s enough here to separate the phone from the pack, and ease the pain of the missing Ice Cream Sandwich update.

Like many smartphones, the RAZR’s “Contacts” system allows you to attach any number of social networking pages to friends in your phone book, allowing you to get in touch with them in any number of ways over Twitter, Facebook and similar sites. It’s a little fiddly, and nowhere near as quick and intuitive as HTC’s Sense offering, but works well enough once it’s set up.

Motorola’s RAZR also uses a universal messaging inbox that pools together SMS messages, Facebook, Twitter, Exchange email and webmail (Homtail, Yahoo, Gmail etc) all in one place. It’s an excellent way of browsing all messages that have ever come from a single contact, and is particularly useful as it adds offline support for browsing messages shared on social networks. It’s one drawback is that the universal inbox is hidden deep behind a number of menus. You have to enter the messaging app before being able to get anywhere near to the universal inbox, or make do with a shoody widget.

Calling contacts makes handy use of a “Smart” dialler, letting you tap out a couple of letters of a contact’s name before quickly seeing their phone number appear. However, calling on the RAZR often lead to strange echo-like noises when “in call”. It’s not massively frustrating as its barely audible, but did diminish the otherwise-premium feel of the phone. 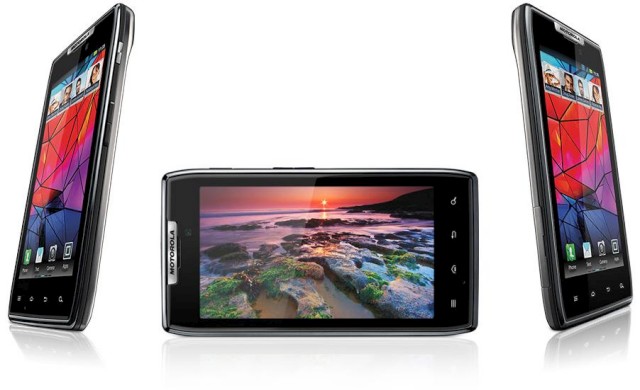 Media playback on the RAZR is particularly nifty. Using the afore-mentioned Motocast feature, music, photos and videos can be pulled into the handset from any number of sources at any time, making the respective player apps more like hubs rather than fenced-off lists. The music player for instance includes DLNA and internet radio playback, as well as access to locally stored tracks all from one place, and even throws up song lyrics and band bios dragged in from online databases. Video playback is solid and steady, with the handset showing no problems playing back high-def content in a number of formats. The photo gallery benefits likewise from Motorola’s aims to give the RAZR a more widely-connected feel, pulling in snaps from social networks as well as those you’ve taken yourself using the phone. It stakes a good claim therefore as using the RAZR as your only PMP device, but be warned; you’ll likely be hard pressed to squeeze more than three-quarters of a day out of its battery.

Video and photo capture on the RAZR was reasonably good, capable of 1080p HD movies and 8MP stills (a 1.3MP front facing camera for video calling also features). Often still images looke accurate and sharp, with a satisfyingly quick shutter speed, but in particularly bright light over-exposure resulted in some images feeling drained and washed-out. Images remained sharp however even in Macro mode, but would benefit from manual white-balance controls. In terms of colour reproduction, videos often suffered from similar exposure issues, and while pin-sharp, suffered from slightly jumpy movement too.

Motorola’s RAZR is an impressive performer, with no one fault major enough to undermine a solid Android smartphone experience. However, despite some clever native app work, we can’t help but think that the RAZR would have benefited from Ice Cream Sandwich support, something that early adopters are going to have to likely wait quite some time for, and a little more work in the photography department to make it a match for Apple’s iPhone 4S. Also, while the 1.2GHz dual-core processor has no problem powering the phone’s silky visuals and screen transitions, it seems a little bit of a cut-corner considering many new top-end phones are now opting for 1.5GHz dual cores instead. As it stands, Motorola’s RAZR is a great bit of kit, but be under no illusions that it wont be superseded before long.