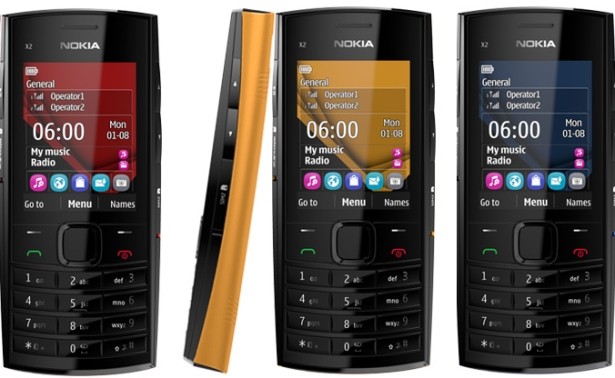 Nokia may be investing most of their time these days on getting their fledgling range of Windows Phone 7 smartphones up to scratch, but that doesn’t mean they’ve abandoned the lucrative low-cost featurephone market too. Today they add another handset to the price-bracket, the Nokia X2-02.

With its music focus confirmed, you get all the usual bells and whistles we’ve come to expect from Nokia’s “X” phones; MP3 playback, FM radio, dedicated music control buttons, a decent loudspeaker and a generous 32GB of storage space for your library of songs all feature. There’s also special audio-processing onboard designed to eke the very best out of your tunes, and the ability to record tracks from the built-in FM tuner.

Elsewhere the phone is pretty much back to basics. With a non-touch 2.2 inches screen at 240×320, it’s very much back to keypad input with the handset. Basic Twitter and Facebook clients are pre-installed however.

It’s reasonable small at 113 x 50 x 15mm and weighing 93grams, but the 2MP camera on the back won’t be up to all that much. GPRS/EGPRS and Bluetooth connectivity round out the feature set, with a stong battery life of 443 hours standby.

A €60 asking-price is expected of the Nokia X2-02, with no firm release window in place yet.