There are some people out there who do not get wrapped up in the latest Call of Duty game that is released every year, I wish I was one of those people sometimes. Believe it or not there are other options out there, ones that don’t involve noob tubing and 12 year olds shouting abuse at you from half way around the world. Here is a quick run down of games to keep you entertained while Call of Duty mania sweeps the world.

The Battlefield series has always been a thorn in the side of the Call of Duty franchise, luring players over to their way of fighting a war, with inclusions of vehicles, advanced weapons, larger fields of combat and more variety in the game modes.

This year’s edition has had a few critics this time around, saying that Battlefield is trying to emulate its main competitor. Besides the critics, Battlefield is a great game that has a unique play style in both single and multiplayer, showing that it is a great game in its own right. More teamwork orientated, it feels more like a group experience when playing the multiplayer. Single player doesn’t revolutionise FPS campaigns but it is still a good play. 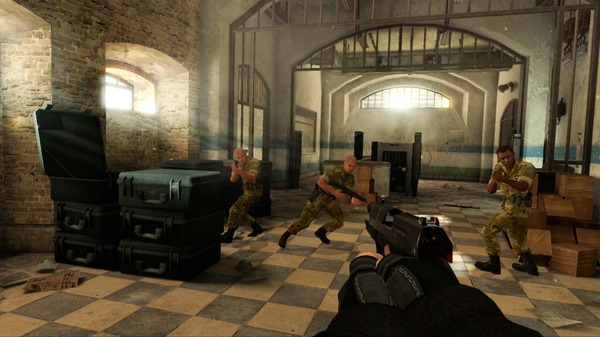 We all remember the N64 classic. Well, us of a certain age do at least, and it was brilliant! This latest James Bond game is a revamped version of the original, with updated graphics and some new levels building on the formula of the classic which was years ahead of its time.

A solid single player is not the main draw here but the multiplayer is where the action is going to be at. With all the best characters from the long history of James Bond returning, the game is bound to help fans of the first game relive the experience that got them hooked on 007 games in the first place.

Resistance has always been the Playstation’s answer to Halo. Its alien enemies and weaponry stretched the imagination of the player as they battled through what seems like endless waves of hell-bent Chimera aliens. The third installment in the series brings us more lavish weapons of destruction, stronger enemies such as the Brawler and some fantastic backdrops to the action.

Multiplayer is the best yet in the franchise, bringing in loads of new maps and ways of blowing up enemy players. No matchmaking tools let it down ever so slightly but in terms of actual game play it is fantastic, with some of the equipment load outs affecting your game style dramatically. Alien technology definitely shakes things up and is a stark contrast to the Call of Duty style multiplayer.

Mobile devices have never been in the front line of the FPS battleground but one title does stand up to its console counterparts. Modern Combat: Black Pegasus follows the same mechanics as many console games in location, variation and gun play. Taking control of three characters you fight your way around the world with the odd quick time event thrown in.

The game also supports multiplayer for 10 players over Wi-fi, playing in capture the flag, team death match and domination formats. 15 weapons are included within the game and is one of the stand out games for all tablets and smartphones. Great shooting action for the on-the-go soldier.

The Wii never had a great FPS franchise; they have Mario but when you just need to point a gun at someone or something your choices are limited. Though limited in range, the quality of the console’s few shooters is often stellar, and Metroid Prime 3 Corruption is a stunning example of this. The latest in a long line of Metroid games sticks to what it knows best; atmospheric locations, good puzzle solving mechanics and some of the best boss fights on the console.

Multiplayer pits everyone in the role of the armoured heroine Samus, using all the abilities at her disposal to outwit your opponents. There are no unfair advantages or weapon load outs to exploit here; this game is all about skill and timing.

Halo, the former FPS juggernaut, is still going strong since its orignal release all those years ago and Halo Reach is the strongest addition to the series yet. The single player continues the epic story of mankind’s fight against the Covenant, with Reach giving us a look into the beginnings of the franchise. This prequel has so much going for it; great game play, fantastic graphics and one of the strongest story lines ever seen in a FPS.

Halo Reach built on all the mechanics that made Halo 3’s multiplayer multi-award winning but added loads of new features to keep the game feeling fresh. New abilities added jetpacks, invisibility and force shields, making the multiplayer more varied and exciting. Although the weapons havent changed since the beginning of the franchise, the best thing about this is that they never needed to change much anyway. It’s timeless shooting gameplay at its best.