Templars, towers, hidden knives, buckets of blood and fancy parkour footwork: Assassin’s Creed is back with Revelations, the fourth instalment in the historical stealth slashing series. With a million loose ends to tie up and the promise of brand new gameplay mechanics, is it the definitive assassin experience Ubisoft Montreal have always promised? Read on to find out.

Jumping from one historical time zone to the next, the Assassin’s Creed games have often struggled to keep on top of the many narrative threads weaving through the series’ lore. With Revelations, Ubisoft Montreal have finally managed to tie each storyline together satisfyingly. Following the now-aged Renaissance killer Ezio Adiotore as he hunts for answers concerning his connection to medieval assassin Altair Ibn-La’Ahad, while also offering a selection of modern descendent Desmond’s Animus meanderings, players can control all three characters over the course of an adventure that finally sees the trio brought together in a meaningful way.

A marked visual improvement over predecessors (an impressive feat in itself considering the quality on offer through the Assassin’s games) Ubisoft Montreal’s direction brings an emotional warmth to the characters that was previously missing. You’ll care about what’s to happen to these greying killers by the game’s conclusion, even if the political intrigue that peppers the storyline remains somewhat impenetrable. As ever, the cities you’ll explore (Rhodes, Masyaf, Constantinople and Cappadocia) are stunning in both scale and execution; these are living, breathing towns, full of amazingly detailed guards, peasants, fellow-assassins and noblemen.

Much of the series signature gameplay remains the same in Assassin’s Creed Revelations. The heart of the game still sees you take on missions, track marks across the city and sneak up on your unsuspecting victims to deliver a killing blow before disappearing into the shadows. 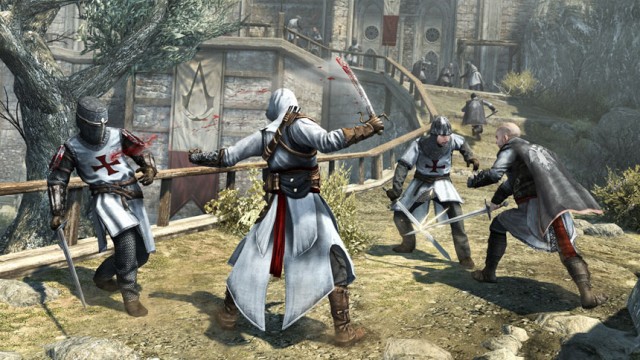 A few notable improvements are made however. To begin with, missions now make clearer sense within the overall story arc; nearly every target you take down has a direct link to your ultimate goal, whereas previously you were left questioning the connection of your target to your Templar tormentors. Likewise, the returning Assassin Recruitment missions, seeing you take control of Templar districts through your network of fellow killers, make better sense in the overall arc of the story.

Combat is also improved. The countering and finishing swordplay remains largely unchanged, aside from a host of slick new kill animations, but the introduction of a button-mapped secondary weapon option adds far more variety to proceedings. It’s now far more viable to mix up attack patterns with the other weapons at your disposal rather than rely on the strength of your swordplay alone, giving combat a little more in common with Rocksteady’s Batman: Arkham games than before. You’ll now also be able to craft bombs throughout the adventure, ranging from simple explosives to coin purses that scatter gold to the begging peasants surrounding guards, disorientating your attackers. They’re use is not vital to the success of your missions, but add a little more tactical depth to proceedings too. 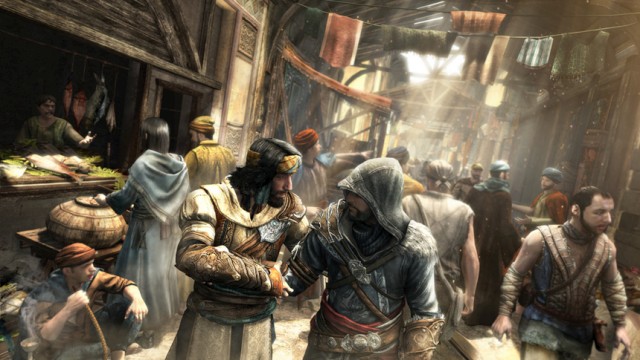 As ever, darting across the rooftops using the assassin’s parkour techniques is a joyous experience, moving with ease and grace across the dramatic backdrops that the game throws up. In Revelations you’ll get a handful of new tools to help with your navigation, opening up new ways of traversing the locations. A zip-line hook lets you quickly get from one distant rooftop to another, and is a lifesaver when pursued by multiple targets, as well as a parachute that lets you glide to safety should you misjudge a leap, or soar quietly towards a target.

The set-piece missions introduced in Assassin’s Creed Brotherhood return and mark the highlights of the game. Carefully splitting up the action, they’re stunning; whether you’re free-running through a fire or being dragged behind a rampaging carriage, they’re consistently exciting moments.

Doing a good job of refining the series staples, Revelations gets a little patchy when it comes to the execution of the new mechanics it introduces. 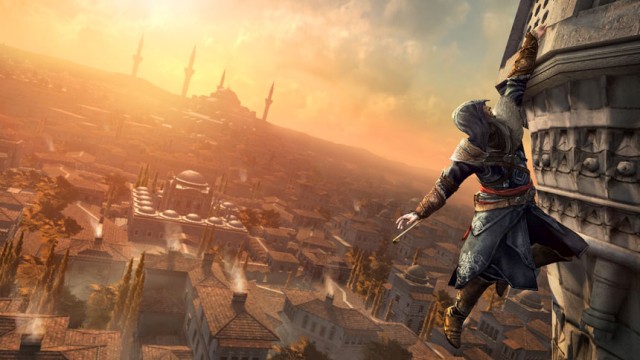 Firstly, the new Den Defence sections. Every time you take over an enemy stronghold through killing their captains, your influence over a region of each city grows. However, brigades of soldiers will attempt to retake their lost positions, which trigger a tower defence minigame. Directing your assassin troops from the rooftops, you’ll select units and place them strategically along the tops of buildings using a cursor selection method in order to quell the advance of your enemies. It’s a jarring, clunky system that is nowhere near as exciting as the main game, and feels completely unnecessary. These sections normally last around ten minutes, and are rendered utterly pointless and devoid of tension once you realise that you can quickly retake strongholds lost in Den Defence as soon as you regain control of your assassin in the main game, simply by killing the new enemy captain.

More intriguing, though equally jarring, are the optional missions that flesh out Desmond’s story. The now-comatose descendant of the assassins finds his mind left wandering through a cryptic strand of the ancestral-memory-hopping Animus system. Depicted as a lonely island, passing through shimmering gates sees Desmond attempt to regain control of his mind through completing a series of first-person enigmas. A bizarre mix of Tetris blocks, Tron visuals and Portal puzzles, the challenges are fairly well crafted, but feel completely at odds with the rest of the game. Though optional, you’ll still want to see how Desmond’s story pans out, meaning for most gamers avoiding them wont really be optional at all. 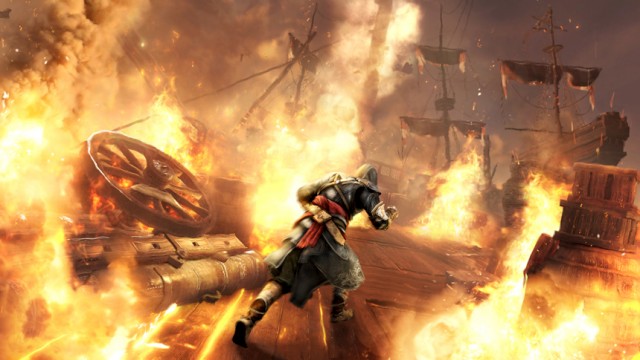 A personal bugbear, the removal of horses was a little disappointing for me too. The gallop of steeds in previous games was particularly exciting, and fitted perfectly into the worlds recreated by Ubisoft Montreal. That they are removed here and bizarre inclusions like the above make the cut instead is frustrating.

Thankfully, Ubisoft Monreal make no similar mistakes in the multipalyer modes. Taking the majority of gamers aback with its quality in Brotherhood, the online play returns once again, tightening up the sneaky/stabby action that sees you making a mockery of your pal’s sleuthing and slicing skills. While new deathmatch and capture the flag “Artefact Assault” modes are merely good, the developers are slowly turning the returning online modes into truly worthy excursions, and are a welcome break from the frag-fests that make up the majority of gaming’s competitive, social play.

Though Assassin’s Creed Revelations is very much the best entrant into the series yet, it claims the title through the quality of the stealth platforming that already defines the series, and not the new additions brought to the table in this fourth instalment. Den Defence modes are clunky and mostly pointless, and while Desmond’s optional puzzle sections intrigue, it’s likely many will find them too jarring to persevere with. What Revelations does improve upon though is story-telling, weaving an interesting narrative around the lives of Ezio and Altair, bringing their blood-soaked tales to a worthy conclusion, and further refinements in the wickedly fun free-running, combat and multiplayer departments. The best parts of the game adhere to the series’ familiar formula, and while it’s difficult to see where Ubisoft will take the franchise next, Revelations is still often a breathtaking adventure.