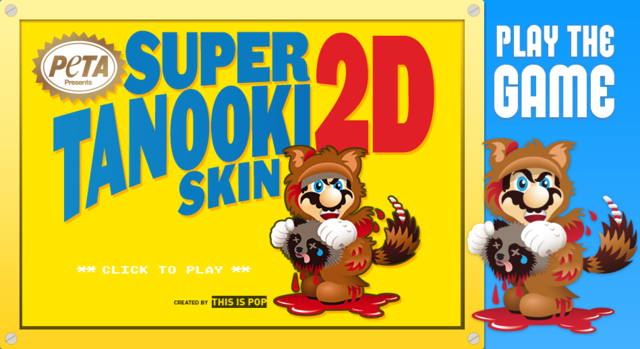 PETA, the People for the Ethical Treatment of Animals, have launched a rather surprise attack on everyone’s favourite plumber. Mario has been the subject of much controversy among the animal rights group for wearing the ‘tanooki suit’, a suit that Mario dons in order to gain the ability to fly and glide, which PETA says shows, “Mario is sending the message that it is OK to wear fur.”

The group have taken it as far as to create a 2D platforming parody of the beloved Nintendo character letting you control a Raccoon Dog and chasing Mario who is wearing your skin.”Tanukis are real life racoon dogs who are beaten and, as PETA’s undercover exposes show, often skinned alive for their fur.” says PETA Executive Vice President Tracy Reiman.

PETA do a fantastic job doing what they do and I support them fully for their protection of animals all over the world, but this is really a bit silly isn’t it? If this was the case, surely we should be up in arms against the Simpsons for airing Itchy and Scratchy cartoons in which they beat each other to death on our TVs every week.

Also something probably should have been done a bit sooner; Mario has apparently been an animal hate activist since 1988 with Super Mario Bros 3. Just think about all the turtles and goombas he has eradicated, he is a danger to the environment!

If the game perhaps showed Mario getting the tanooki suit by killing an animal to take it PETA may have more of a case against the Italian plumber but this is very much clutching at straws from their side.

Update: Nintendo have responded to the claims by PETA with the following statement given to Eurogamer:

“Mario often takes the appearance of certain animals and objects in his games. These have included a frog, a penguin, a balloon and even a metallic version of himself. These lighthearted and whimsical transformations give Mario different abilities and make his games fun to play. The different forms Mario takes make no statement beyond the games themselves.”