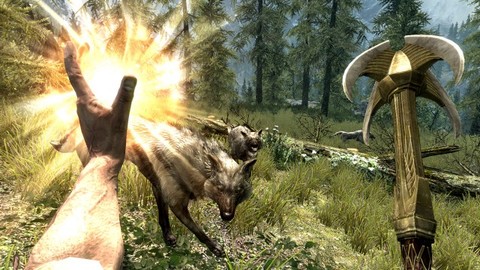 From recent Steam stats it looks like there is one place that Call of Duty Modern Warfare 3 isn’t all powerful, the PC. Gamers have traded their AK47’s and UAV’s for a sword, shield and a tankard full of mead.

Recently published figures from the PC games distributor Steam shows that Elder Scrolls Skyrim has outsold the FPS powerhouse, and by quite a margin. So far today figures peaked at 287,000 people playing Skyrim compared to 120,000 playing some form of Modern Warfare 3 (multiplayer and single player).

These figures are in some respects quite surprising but in others not much so. It is quite a feat for any game to outsell the mammoth that is Modern Warfare, not least in the first week of release, but to do it by such a margin as well is god damn impressive. However ask a PC player what they play on their PC and a lot of them will tell you that RPG’s are the way forward. It has always been the case that an RPG should be played with a keyboard and mouse not with a controller.

Which ever way you look at it, the feat is huge and Skyrim deserves the praise a lot of hard work has gone into the game and it has been give the respect it deserves by PC gamers where perhaps console players have stuck to what they know best, head shots and care packages.