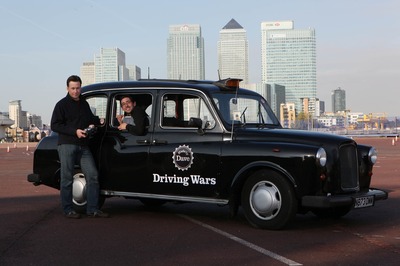 Here’s a tech gadget you probably wouldn’t want to take down the park on a Sunday – not unless you wanted terrified kids fleeing for their lives.

Described as the ‘ultimate boy’s toy’ it’s a full-sized London Black Cab with one big difference. It’s controlled by a handheld remote.

For a ‘gadget’ weighing just shy of two tonnes and capable of hitting 80mph, click-happy controllers will have a remarkable level of authority over steering control, forward and reverse gearing, a sensitive braking system and a fully proportional throttle.

And Londoners were given a glimpse of the vehicle when it pulled up outside the O2 arena, alongside its driver! The brainchild of engineering wizard Dr. James Brighton, it marks the launch of Driving Wars, a brand new extreme driving show due to hit Dave on Wednesday, October 19th. Dr Brighton and the Driving Wars team – including presenter Colin Murray – spent two months working on the cab which is controlled via a hand held control console.

Driving Wars invites members of the public to take to the remote controls of a series of specially customised real cars in order to recreate moments of motoring magic from TV and cinema. According to Dave, it promieses to be a heady cocktail of burnt rubber, squealing tyres and spectacular pyrotechnics.