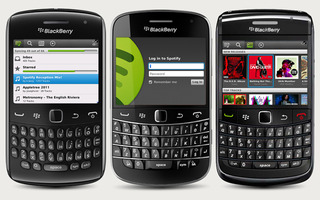 Some welcome good news for BlackBerry owners today after the recent outage troubles. It’s been a long time coming, but BlackBerry users can finally get the superb Spotify music streaming service on their handsets.

Revealed today over on the official Spotify blog, those who favour RIM’s smartphones now have a version of the Spotify app tailored to their devices.

However, as it stands it’s being listed up as a “preview” release, and as such, comes with a few caveats.

Firstly an obvious one; you’ll need a premium Spotify account to take your music out on the go with you.

Secondly, Spotify for BlackBerry only works with GSM phones, meaning US readers are out of luck for the time being at least. The only BlackBerry handsets tested and officially confirmed to be working with the service are the BlackBerry 9780 Bold, 9700 Bold, 9300 Curve, original 9000 Bold and 8520 Curve, while unofficial reports of the Bold 9900 BlackBerry 7 handset also running without a hitch have been made.

For now, those with Torch or Storm touchscreen BlackBerry’s are out of luck it would seem.

If you fit into the above criteria however, you’ll get all the usual Spotify goodies, including offline playlists, Last.fm scrobbling and all the usual search features, with the added ease of a QWERTY keyboard.

Not yet on the BlackBerry App World store, you can try the preview build by clicking here.