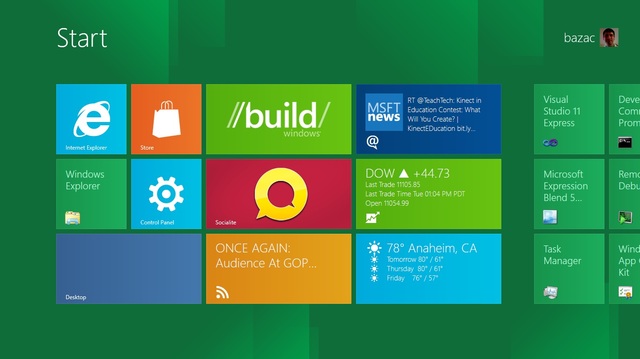 Microsoft have been showing off the latest build of their Windows 8 operating system at their annual BUILD developer’s conference in California this week, revealing new tricks and features of their OS to app and program makers from around the globe.

If you’re not a developer but would still like to have a glimpse at Windows 8 before its official launch date, you can! Microsoft have made the Developer Preview build available to download. Read on for how to install it.

Head over to the Windows Dev Center and pick either the 32-bit or 64-bit version of the OS, depending on your system specs.

There you’ll also be presented with the option to grab a 64-bit build with developer tools included, so you’ll be able to tinker with the Windows SDK, Microsoft Visual Studio 11 Express for Windows Developer Preview, Microsoft Expression Blend 5 for Developer Preview and 28 Metro style apps if you so desire.

The Windows 8 download comes as an .iso image file, so you’re going to have to burn it as a bootable disc to get it to install, using software like Nero or Alcohol.

Installing the Windows 8 version with developer tools requires a clean install, but if you go for the versions without the tools you can install the preview build on a machine with Windows Vista or Windows 7, retaining your accounts, files and settings, or install the 32-bit version on an XP machine keeping your account and files but losing your settings.

Do note however that the Windows 8 Developer Preview can’t be uninstalled, so you’re going to have to keep your regular Windows disc to hand if you want to revert back.