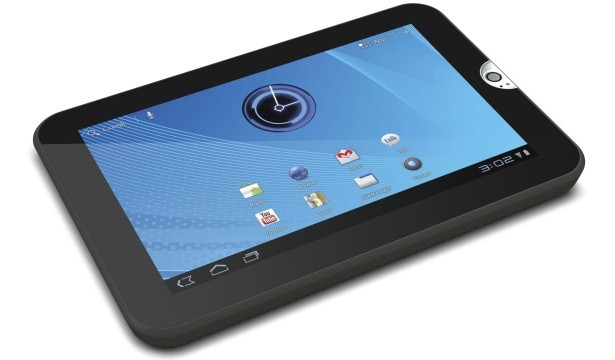 Toshiba have announced plans to launch a 7 inch re-boot of their Thrive tablet, running Android 2.3 and boasting a NVIDIA Tegra 2 chipset, just in time for Christmas.

Whereas the Toshiba AT200 that Tosh’ were touting at IFA was lined up as the thinnest tablet on the market, the 7-inch Thrive is a little beefier, measuring 12mm thick and weighing 400g.

Despite its relatively diminutive size, the Thrive 7-inch looks as though it will be packing quite an impressive screen. LED backlit with AutoBrite tech behind it, it manages a solid 1280 x 800 resolution with the same Adaptive Display and Resolution+ technologies Toshiba also push into their flatscreen TVs.

Both 5MP rear and 2MP front cameras feature, with the video recording abilities of both merely stated as being “HD” by Toshiba.

16 and 32 GB variations will be on offer, with all 7 inch Thrive tablets offering mini-USB, micro-HDMI, microSD, Wi-Fi, Bluetooth and GPS.

Though there’s a disparity between release dates stated on the website and the press release (one says Novemeber, the other December) the Thrive 7-inch should be instores by Christmas at the very least, providing the same launch delays that hit the original Thrive don’t strike again.