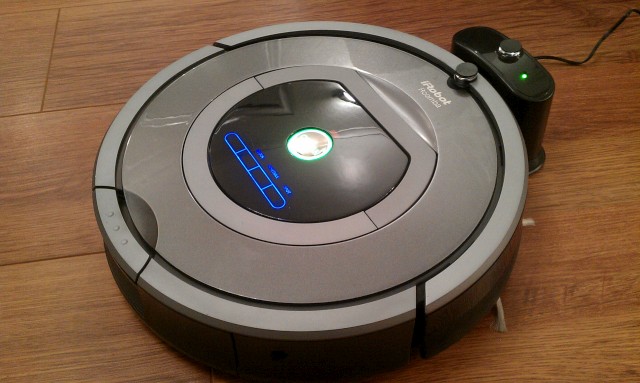 The future promised a lot, and while robot butlers and hovercars are still pipe-dreams, robot vacuum cleaners are very much a reality. Hot on the heels of its IFA 2011 unveiling, Tech Digest got to spend some quality time with our very own clean-freak R2D2, the iRobot Roomba 780 vacuum cleaner. Read on to see whether or not it’s time to send the Dyson to the dumpster.

I’m a “cat man”. I’ve had more of the furry felines as pets than hot dinners, and am currently the ward of two moulting black cats. I also live in a mostly-carpeted house, and often have my crumb-dropping toddler nephews over to visit. This would make me (if I do say so myself) something of a “grubby-carpet” expert. So obviously I was delighted to find that I could not only hand over my hoovering duties to iRobot’s latest top-end robot vacuum cleaner (the Roomba 780), but that it did a damn fine job of cleaning up after my messy mates too.

Part of the new 700 Series line that iRobot launched over the weekend at the IFA 2011 tech show, the 780 system has a few notable improvements over its predecessors. There’s new touch-sensitive controls, new iAdapt Responsive Cleaning Technology for helping the Roomba better navigate your home and better dirt-spotting sensors and cleaning routines for isolating and clearing away different types of mess. Though you’d assume a robot would be a nightmare to set up, the Roomba 780 is actually very simple; it’s just a matter of taking out a battery tab and the wheel and brush stoppers, popping the clear bin unit into the bot and leaving the Roomba 780 to charge overnight. From here on in you could potentially leave the Roomba 780 to go about its business automatically, but there are multiple ways of scheduling clean ups, which we’ll go into more detail on in a sec.

First though, the matters of size and style. At roughly 50 cm in diameter and about 10cm high, the circular Roomba 780 is relatively small in comparison to the majority of vacuum cleaners. Even it’s Home base (the charging unit that the Roomba returns to when it’s finished cleaning your house or is running low on power) is discrete. It may not have the bells and whistles of R2D2, but the Roomba is sensibly styled with black and grey mixtures of gloss and matte plastics, with a carry handle to help you move it about the house when necessary. LED displays on the top of the cleaner easily let you view programme cycles and spot when the bin needs emptying, with strong, colourful glows of red, blue and orange displayed depending on the circumstances. There’s a big central “Clean” button if you want to send the Roomba about its business immediately, and practically all functionality can be carried out with a supplied IR remote too. 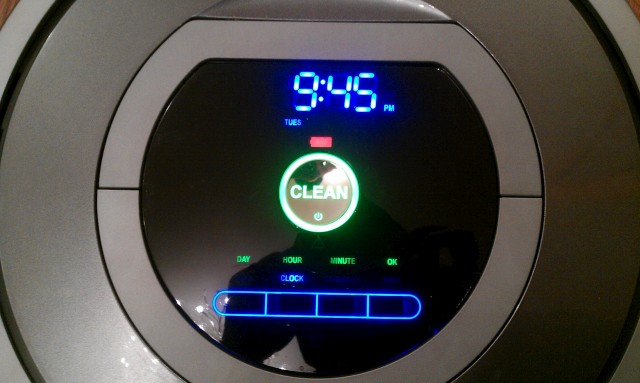 Using the onboard clock, you can set up any cleaning schedule that suits your home’s needs, sending the Roomba skirting around the floor at a surprisingly fast pace. All actions are accompanied by voice notifications too, which charmingly reminded us of our favourite educational toy from the late 80s/early 90s, the Speak and Spell. The new cleaning sensors seem to have worked very well too; though we haven’t had a previous model with which to compare the 780, we had no real complaints with how the Roomba 780 cleaned both our carpets and wooden flooring areas. iRobot, like all vacuum cleaner manufacturers, do encourage you to avoid hoovering up wet or mushy substances though.

Other than that, be they large chunks of popcorn or fine animal hairs, the Roomba 780 grabbed them all…eventually. It’s hard to argue with the thoroughness of the clean this Robot vacuum cleaner manages, but do expect it to be darting around for quite some time per cycle. The bin onboard is also a little bit on the small side, so expect to empty it more-or-less after each average clean cycle.

If however you just need to sort out a quick crumb drop or or particularly messy post-party area, the Roomba 780 also features a “Spot” clean mode, which will set the robot off for a hardcore cleaning session in its immediate one-metre diameter surroundings. It’s a great feature if you’ve got an intense spillage to clean up in a short amount of time. 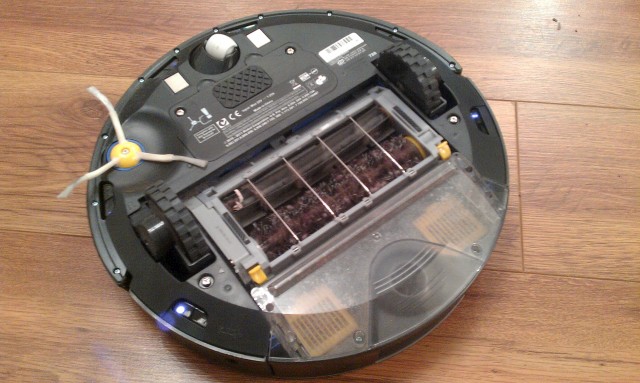 Another excellent feature is the ability to set up Lighthouses and Virtual Walls to help the Roomba navigate areas that it’s finding hard to get around, or block off areas that don’t need cleaning. You get two units that can act as either Walls or Lighthouses, each sending out a signal telling the Roomba where it should and shouldn’t be heading. While the circular design means the Roomba will always struggle to clean room corners, the Lighthouse features let it weave around chair and table legs with ease.

Once the Roomba 780 starts cleaning you can pretty much leave it unattended, though there are a handful of things it doesn’t like. Wires and rug tassels can hold the Roomba 780 up, causing it to spin brushes in reverse for quite some time until it’s convinced it’s clear of any tangles. The environmental sensors also don’t pick up black surfaces very well, which meant the Roomba 780 would bash into my glossy black home cinema subwoofer quite regularly.

Last but not least; stairs. The Roomba 780 has a cliff sensor that means it won’t throw itself down steep drops, but that also means that it won’t be able to go up and down stairs cleaning them if need be. That cliff sensor works perfectly, but is arguably almost too smart; we could swear the Roomba 780 was teasing us like HAL from 2001: A Space Odyssey as it darted towards the top drop from the stairs, only to stop and reverse at the very last second. Terrifying stuff considering I had to send back the review sample a week later.

It’s a bit of a stretch to call a vacuum cleaner fun, but we have to admit the iRobot Roomba 780 did raise a fair few smiles. From its charming robot voice and nifty touch-sensitive control panel to its ability to drag stubborn cat fur out of our carpet, it was a pleasure to have a new robot pal around the house. It’s a fair bit slower than doing the work manually, but when you’re sipping an icy cool beer with your feet up while the Roomba does the dirty work, who’s going to complain?