All eyes may be on the impending iPhone 5 launch next week, but at the end of the day sales speak louder than an updated spec sheet. So what have the UK smartphone-buying public been spending their hard-earned dosh on?

Looking specifically at the last 6 months, analysts Nielsen have revealed that 44% of new smartphone sales are handsets of the Android variety, followed by RIM’s BlackBerry devices with a quarter of the market. Apple’s iPhones accounted for just 18%.

A couple of things worth remembering here; firstly, there are no end of Android handsets out there now, and a fair few BlackBerry options too, compared to just a single iPhone model more-or-less released each year. As if you hadn’t noticed, we’re still waiting for an iPhone 5 to rear its head too, which would undoubtedly push iOS a little further up the tables in the next 6 months were Nielsen still keeping tabs.

Scroll below for a nice and colourful chart displaying the results: 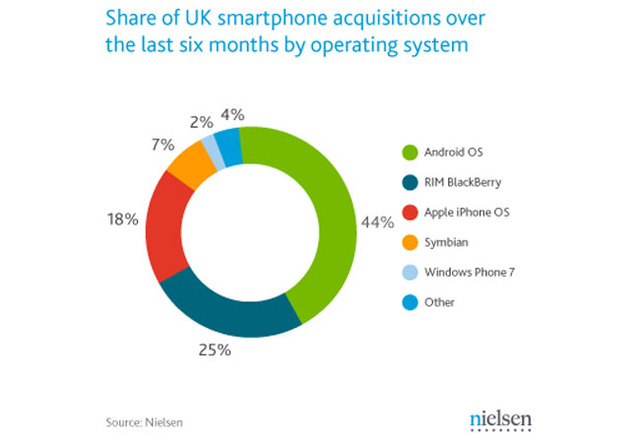