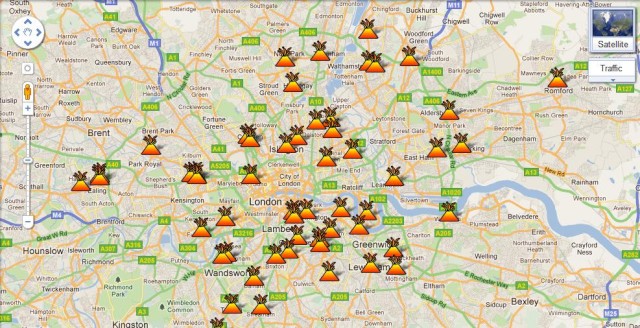 With violence and looting breaking out sporadically across the UK last night during prolonged bouts of rioting, it was at times incredibly difficult to keep track of which areas had been targeted and how badly they had suffered, if at all.

News reporters were dropping snippets of information from all over the country, while trying to keep a track of Twitter hashtags and sifting the truth from the hearsay was near impossible. There was one point when a twitpic of army tanks ammassing at the Central London Bank location got Twitter into a frenzy, only to be debunked as an image shot from the Egyptian protests earlier in the year.

However, a map highlighting all the confirmed trouble hotspots, based on Google mapping technology, has been built.

James Cridland, a consultant, writer and public speaker who “concentrates on the effect that new platforms and technology are having on the radio business,” put together the map, only using verified information.

“I realised that, in order for this map to be useful, every entry needed to be verified, and verifiable for others too,” said Cridland on his blog.

“For every report, I searched Google News, Twitter, and major news sites to try and establish some sort of verification. My criteria was that something had to be reported by an established news organisation (BBC, Sky, local newspapers) or by multiple people on Twitter in different ways.”

It’s a frightening glimpse at a country inflamed and in flames. Click here to view it.

One thought on “UK Riot Map: Verified hotspots for violence and looting revealed”