Age of Empires Online represents the dawn of a new era for Microsoft’s flagship RTS series. In the hands of new developers and with added online social features, this free-to-play title has one eye on the future and one foot in the past. Can it bring the old and new together in harmony, or will gamers be warring against this new direction for the veritable series? Read on to find out.

Few real-time strategy series are as revered as Age of Empires. As well as leading the way with perfectly balanced combative units, it had a great defensive system too and finely tuned resource management, tied up in a sweeping historical bow that would make Cecil B. DeMille proud.

In many ways, Age of Empires Online retains much of what made the first three entries into the series (and their many expansions) great. You’ll take a small gang of villagers from one of history’s earliest cultures, and set them about collecting resources like stone, wood, food and gold in order to build buildings and then raise an army to protect them. You’ll expand your civilisation to bursting point, forcing you to seek out new outposts to colonise, which will inevitably lead you to discover opposing forces. It then (usually) becomes a race to make your civilisation the most strongly equipped around, passing through to more advanced historical ages, building more powerful offensive units and then crushing your foes with military might. 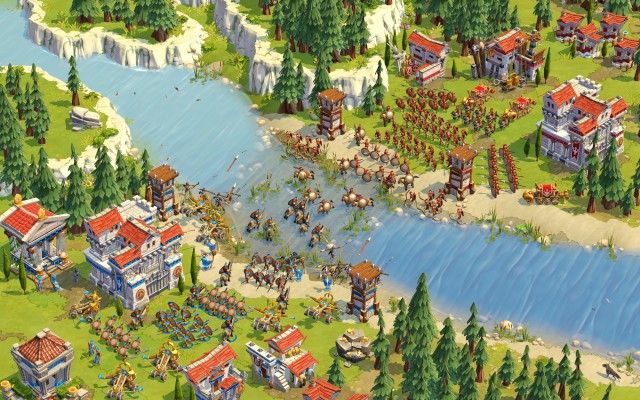 It’s not complicated by today’s standards, but it’s still plenty of fun, and underlines the majority of what makes up Age of Empires Online’s gameplay, which is nothing but a good thing. In this respect Age of Empires Online gets off to a good start; it’ll feel familiar to long time fans, while newcomers have a tried, tested and much loved system to explore.

Visually, the historically accurate feel of older AoE games has been replaced with colourful, caricatured units and exaggerated cultural architecture. This will likely make serious Age of Empires fans turn their noses up as it’s such an obvious departure and a pointer towards the casual market Microsoft are intending to snare with this new entry, but that’s mostly unfounded as it actually looks rather good. There’s lots of life in the varied villagers and foot soldiers, and overall presentation is very good with a clear, accessible UI. More obvious hotkeys would have been useful though.

But while the tried and tested Age of Empires mechanics still hold up remarkably well, the additions that make this a unique entry in the series drag it down.

The real problems stem from the new online elements and the “freemium” model employed here. Let start though by noting that it’s not all bad. Having a persistent online capital city for instance is a great idea, and being able to decorate it as you see fit to show off to your pals, as well as using it as a multiplayer hub, works very well. Being able to add persistent advisers who “buff” your cites through the ages is good too, and gives you unique angles with which to take on opponents. 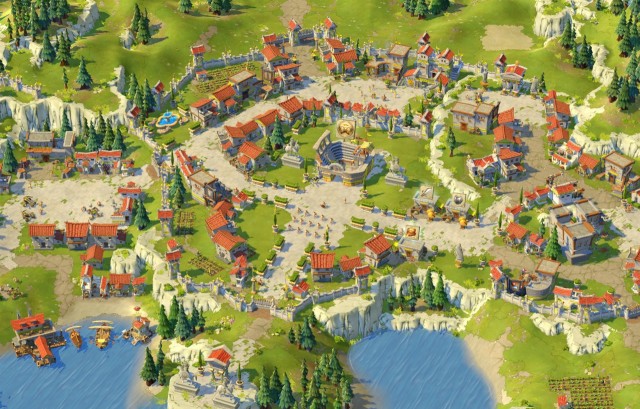 But there are terrible things that drag it all down too. For starters, the questing system. You’ll level up your civilisation through quests rather than the story driven campaign that was present in earlier titles. They’ll unlock new units, and eventually level up your city into a grand wonder. That’s fine at first, but quests soon turn into familiar MMO grinds, dishing out the same sort of missions over and over again. As each time you’ll have to build up a new little outpost and defences, this grows incredibly tedious, forcing you to replay the more prosaic early elements of city building over and over. If you want to remain competitive on a multiplayer level you’ll have to play through them too, as they’re the only way to access the higher tier units and upgrades.

The gulf between free players and premium players is vast. If you don’t cough up dough you don’t get access to certain units, certain technologies, certain crafting abilities, sufficient storage space for crafting or ranked player-versus-player match ups. It’s worth a quick go as a taster without paying, but you’re really going to have to pay if you want to truly play at this game’s best.

Premium content then allows for Greek and Egyptian civilisations at full strength, but at £15 a pop that’s far too expensive, especially when you know there are at least two more civilisations down the line to grab (Celts and Persians, if you’re interested). £80 will grab you a 6-month season pass, giving access to all content within that time window, which would include the likes of decorative capital city items and consumable buffs and units. That’s just too much, and doesn’t work well in the pocket-money way that the freemium model thrives on.

This inevitably leads to balancing issues, but some of these stem from the game itself. In order to accommodate the “always on” Farmville style capital city, there’s an annoying crafting system that requires you to check in on your production at regular intervals. It’s a boring time sink, but a necessity if you want to be powerful empire. 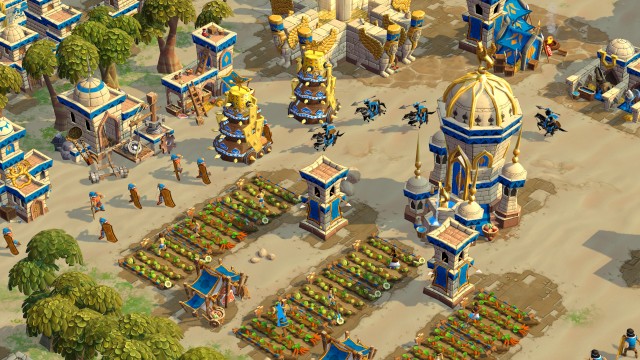 The bigger problem here is that these crafted items are horribly unbalanced too, which leads to rewards being given to players investing the most time in the crafting system rather than the player with the most skill. Facing off against the exact same civilisation with a player with at the same level, only to be bested by his inferior forces using a near-mythical item is incredibly disheartening. This is not good news for a franchise that once prided itself as a “go-to” competitive game.

There are bugs aplenty too, which will no doubt be ironed out with patches, but are worth noting all the same. Age of Empires Online requires that most hated of newly implemented PC DRM conventions; the constant broadband connection. It’s annoying as it is and (in a free-to-play game especially) wholly unnecessary, but goes the extra mile to frustrate by kicking you out of the game every time there’s a blip in your internet connection. No countdown, nothing. Quest over, which is particularly frustrating if you’re halfway through a lengthy one. Likewise, AI path-finding can at times be atrocious, and will have you screaming at the screen as your units insist on taking the longest route to a battle, or refuse to take the path less trodden in order to line up a stealthy “back door” attack.

The core fun of what made Age of Empires the RTS to beat back in its heyday is still here. The problem is its hidden away, only at its best when you cough up for premium content, and then even that is extravagantly expensive in the long term. Having a capital city as an online hub for your friends is great, but these added social aspects came at the price of the inclusion of quest-grinding filler and balancing issues to the justify the “Online” suffix of the title. In this age of Starcraft II, Empires has lost its RTS throne.