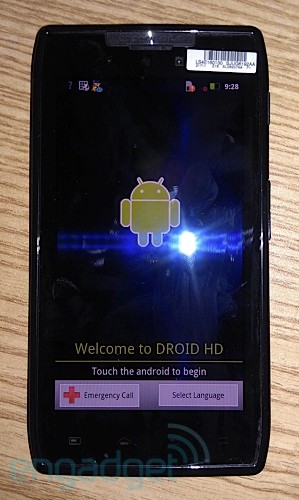 The handset is rumoured to be packing Android version Gingerbread, with a whopping 4.5 inch touchscreen with a qHD resolution, or potentially even a crisp 1280×720 resolution, in line with its HD branding.

Camera capabilities are of the 8MP/1080p variety with LED flash. A front facing camera for video calls and a HDMI port for video outputting to a big HD screen feature too.

microSD and SIM card slots seem to be sidemounted, alongside a thin, potentially removable battery. This supports the theory that we’re also looking at a super-thin smartphone, between 8.5 and 9mm, which makes its specs sheet sound more or less a match for the superb Samsung Galaxy S II.

No official details on the Droid HD yet, but we’ll keep you posted.