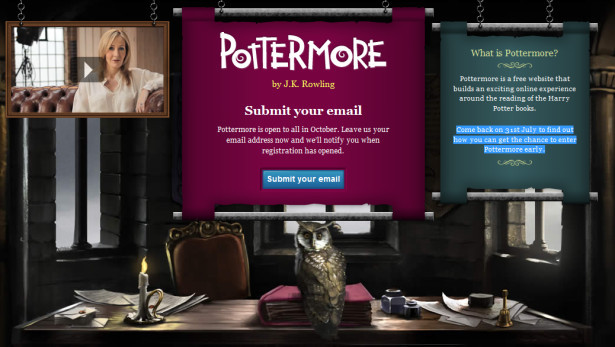 Harry Potter fans looking to get early access to the Pottermore social network ahead of its October opening are being tricked by dark web magic. No, it’s not Voldemort hitting the internet killswitch, but a gang of scammers selling fake “early access” accounts to Pottermore.

Christopher Boyd of GFI labs has uncovered a number of deathly plots targetting Pot-heads (as we like to call Potter fans here at Tech Digest). From info harvesting surveys to spam marketing and bogus account sales, there’s enough ne’er do wells exploiting Pottermore to fill the whole of Azkaban by the looks of things.

“You can expect more hacked sites serving Malware alongside poisoned search engine results – both text and image. If your kids are happily babbling on about the joys of Pottermore, it may well be worth sitting down with them and pointing out the types of shenanigans they need to avoid,” said Boyd.

Due to launch in October, Pottermore will be the new online home for Harry Potter, as well as acting as a social network for fans of the boy wizard to interact through. As well as offering exclusive content and the possibility of new stories from the wizarding world, Pottermore will be the only place where you can download official ebook versions of the popular series of novels.