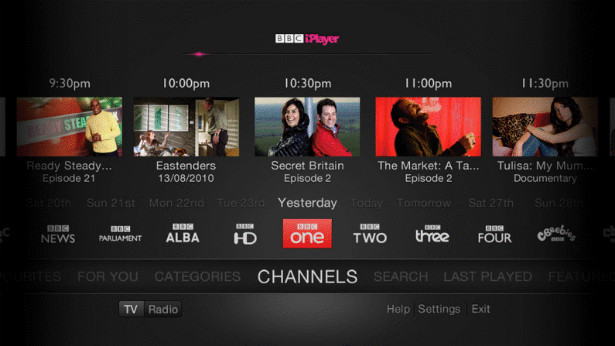 Versions of the BBC iPlayer video on demand service for web connected TVs and the PlayStation 3 games console get a refresh today to make its user interface even more intuitive.

Designed to make arm-chair navigation of the catalogue of programmes even easier, the Beeb have introduced the ability to flcik through channels, as well as a simplified search function among other improvements.

“BBC iPlayer has been tremendously successful. With today’s announcement, we’re transforming iPlayer in its most natural home: right on the living room TV,” said Daniel Danker, BBC’s general manager of Programmes & On Demand.

“By creating a product that’s as simple and intuitive as flicking through TV channels, the BBC is bringing on demand television to mainstream audiences across the UK.

“Last week, Ofcom reported that 10% of TV sets sold in the UK are internet ready. But BBC iPlayer is already available on over 300 connected TVs and blu-ray disc players, which has resulted in a 5x growth of iPlayer on TV over the last 6 months alone. At this rate of growth, in the next few years we could well see over half of iPlayer use directly on the living room TV.”

The update will hit the PS3 version of the service first, rolling out to over 300 more connected TV models in the coming months.