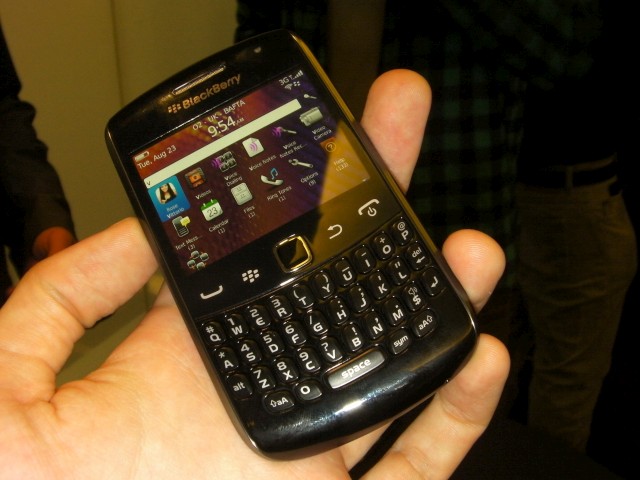 It’s been a long time coming, but in the wake of leaks aplenty RIM have finally revealed the lastest BlackBerry Curve handsets. Available in three flavours (depending on international territories), you’re looking at the BlackBerry Curve 9360, 9350 and 9370.

The only real differences between each model is the connectivity systems employed. The UK version packs GSM / UMTS, while there’s CDMA for the 9350 and both GSM and CDMA for the 9370. We went hands-on with the BlackBerry Curve 9360 at its London launch event this morning.

Other than connectivity differences, specs-wise it’s the same across the board pretty much for all three handsets, including the 9360 that we tried out. An 800 MHz processor powers a 2.44 inch display with a resolution of 480×360. Packing the BlackBerry 7 OS, it’s a non-touch smartphone that instead relies on the old BlackBerry faithful; the trackpad.

Whether its BlackBerry OS 7 or the 800MHz processor, it’s the zippiest Curve we’ve had the pleasure of using, jumping from built-in Facebook and Twitter apps to the browser in the blink of an eye. The screen is sharp too; 480×360 is a relatively dense pixel rate for a screen this size, but we still find the lack of touch on BlackBerry OS 7 a pain; we felt ourselves yearning to tap at a link to activate it on web pages, but alas, no dice.

Still, the handset impresses most in one area in particular; its size. This is the slimmest Curve handset yet, measuring up as a whole at 109x60mm with a thickness of 11mm. The plastic-heavy build still doesn’t scream chic, but it’s lightweight and comfortable in the hand. Though no pricing has been revealed yet, we got the impression that this is going to be a more affordable handset from RIM, and in this regard its form will likely match its price point. 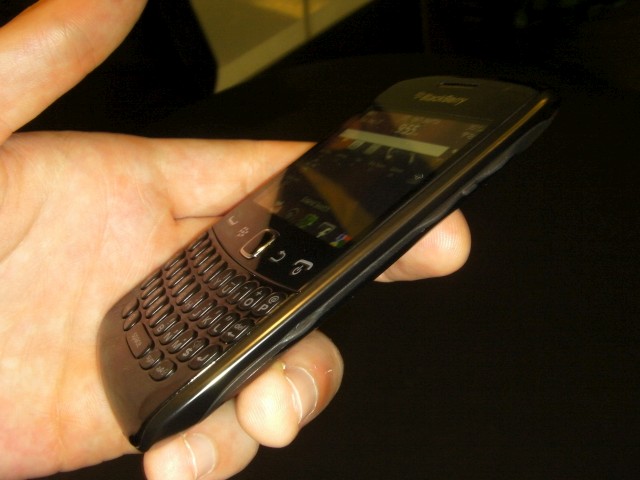 A QWERTY keyboard is the standard for the Curve series, and in this respect the 9360 doesn’t look to dissapoint. Despite the slimmer frame, the hard plastic keys still have a comfortable amount of “click” behind them, and BlackBerry users will feel right at home tapping out emails and the like.

512MB of onboard memory can be supplemented by a 32GB microSD card, and you’ll be able to fill that up with snaps taken from the 5MP camera on the rear. It’s a fixed focus EDoF with LED flash and VGA video shooting. Nothing crazy, but again good for what we expect from a low cost handset.

NFC tech and a smallish 1000mAh battery round out the specs. Here’s what Mike Lazaridis, President and Co-CEO at Research In Motion, had to say about the launch:

“These new models will build on the incredible success of the BlackBerry Curve line and further expand the largest global launch of BlackBerry smartphones in our history.

“The new BlackBerry Curve smartphones are absolutely stunning and offer a significant performance upgrade with an unmatched mobile social experience for the millions of feature phone users in the market as well as our existing Curve customers.”

If the handset launches in the budget-friendly bracket we assume it will, it’s the first real-contender RIM have offered the masses in a little while. It has all the popular trappings of the Curve series in a far more sleek chassis. However, as only an incremental update elsewhere, it’s still unlikely too woo the iPhone or Android faithful.

So what do you think? Enough to bring RIM back from the brink? We’ll have more details once we get some extended time with the handset, but for now check out the 9360 in some more shots below.