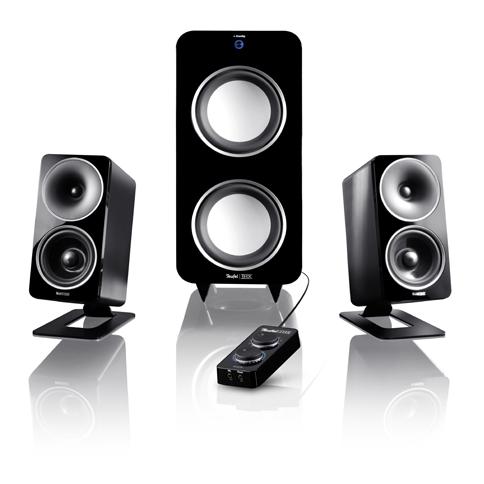 PC speakers come in many shapes, sizes and price brackets. While most of the time we’ll be happy to sift through our iTunes catalogue with a respectably priced and spec’ed set of desktop noise makers, the audiophile in everyone sometimes wants a little bit more class to go along with those lossless tracks. Enter then the Teufel Concept D 500 THX PC speakers; massive in both physical size and pricing and packing THX certification, does more dough equate to more sonic bang for your buck?

Were we solely rating the Concept D 500 THX speakers on a matching price-to-size- ratio, they’d earn top marks. They’re a gigantic pairing of two satellite speakers and a subwoofer (as well as a small wired remote) that will likely dwarf the other elements of your PC workstation. You’re looking at 115mm x 290mm x 240mm for each satellite, and 210mm x 475mm x 455mm for the sub, with these weighing in at 1.9kg and 12.9 kg respectively. Solidly built, Teufel have sensibly kept to a minimalist approach in terms of design, with simple black gloss and matte surfaces accented by silver highlights. Despite their size, they’ll fit in almost anywhere, style wise. The satellites can be supported by included metal stands, or can be free standing both vertically or horizontally, but their asymmetrical design can make them look a little bit strange in the latter orientation.

Flip the speakers around and on the rear you’ll see the welcome sight of binding posts as opposed to spring clips for the cabling needed to link the satellites and sub together. It’s also worth noting that Teufel don’t supply the speaker cables here, just the power one; a little stingy considering the £449 price tag. As well as the binding posts, the rear of the sub also houses the power input, the connection for the wired remote, a microphone pass-through and a coaxial line-in connection. The LED-lit power button can be found on the subwoofer’s front, sitting dangerously exposed to the point where it may be a little too easy to knock it off.

Taking a look at the remote itself, you’ll find a handy microphone input on it, meaning you wont have to fumble around the rear of the speakers if you need to get chatting online, as well as a volume dial and dedicated bass dial too. It’s a little annoying that Teufel didn’t accommodate for a second audio source with another input here, if for instance you wanted to play a handful of tracks back from a mobile phone or MP3 player without firing up your computer. 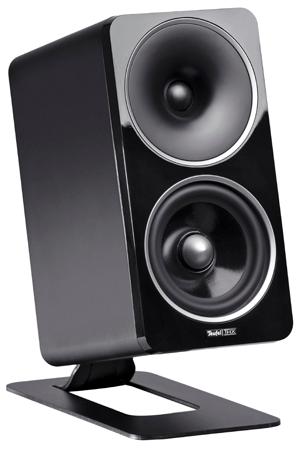 The Concept D 500 THX’s gigantic size gives them the advantage of being able to cram in some suitably large drivers. In the satellites you’ve got 19mm tweeters for your highs alongside 100mm woofers to hit mid ranges. The subwoofer pumps out from a pair 165mm drivers that, when cranked up to the max through the remote’s bass dial, give you lowrider-rivalling levels of heavy bass. As such, you’re going want to pair these speakers with decent soundcard; a 3.5mm laptop output isn’t going to deliver the best results.

Find the right balance with that potentially over-powering subwoofer however and you’re in for a wondrous performance from the Concept D 500 THX speakers, as you’d expect from a set boasting THX certification. The satellites are detailed and crisp, without sounding clinical, and drove the dialogue of Saving Private Ryan over the shells, booms and crack of gunfire from the Omaha Beach assault scene with aplomb. Likewise, you can expect similarly bombastic results if you’re a PC gamer. Testing a range of music yielded similarly impressive results. The sample-heavy, summery delights of The Avalanche’s Since I Left You album had a delightfully smooth feel, shimmering with the title track’s flute hook and condensed vocals, while the faux-vinyl pop of the record’s ambience was nearly as good as the real thing. Cranking up the bass a little for Nirvana’s In Utero saw Dave Grohl’s pummelling drum tracks pound around the room with satisfying snap and kick from the snare, while the high sequels of Scentless Apprentice were no trouble for the satellites. Even at ear-splittlingly loud volume levels, the speakers showed no obvious signs of distortion. Top stuff.

While the jump in sound quality from lower-priced, high-quality rivals to the £449 Concept D 500 speakers may only be audible to a keen audiophile, they remain a superb set of speakers indeed. Their imposing size allows for superb bass response, and a warm, considered tone, even if similar audio delights can be found in cheaper rivals. Provided you’ve the money and the space to house these sizeable speakers, you won’t be disappointed.