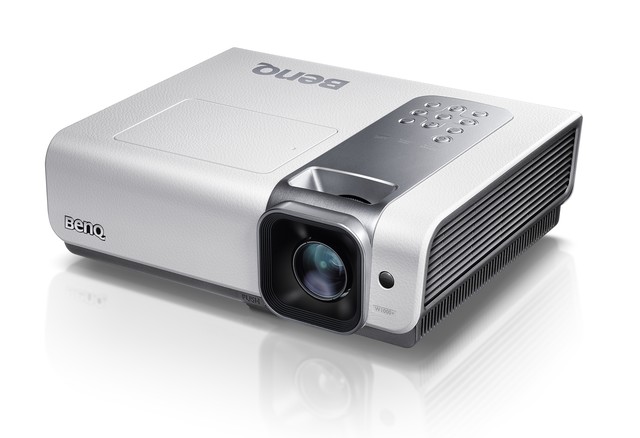 BenQ surprised everyone with the quality of their W1000 projector when it launched in the back end of 2009. Offering superb picture quality for under a grand, it practically single-handedly redefined the the word “value” when it came to home cinema projectors. The BenQ W1000+ is something of a sequel then, refining the features of the first model and slashing the price to an even more attractive low. Is it another bargain offering?

First things first; the BenQ W1000+ isn’t much of a looker. Though the “white with silver accents” design in theory should look good, in practice it’s a very cheap-looking box, with ugly ventilation strips on the side and sticky control buttons on the top. Focus and horizontal picture-shift dials sit just behind the square lens housing, with this deep recess doing little to help the projector’s already messy stylings. It’s much better served by its connectivity options however, packing in two HDMIs, D-Sub PC port, component video port, and USB/RS-232 control ports; far more than you’d expect at this price range.

Thankfully, the looks department is one of the only places where the W1000+ betrays its budget price bracket. Capable of throwing full 1080p images out at a maximum size of 300 inches, the W1000+ is capable of superb images despite its bargain labelling.

That’s mostly thanks to the refined colour wheel used here. Though the original W1000 projector was a fine offering, it did suffer greatly from the dreaded “rainbow effect” (causing solid stripes of red, green and blue to appear) that many cheaper projectors fall foul of. With a significant speed boost and freshly optimised waveform software in the colour wheel employed here, the BenQ W1000+ has all but eliminated this unsightly problem.

The image improvements over the W1000 model don’t stop with the reduced “rainbow effect” either. Colour temperature is markedly better, while the contrast ratio jumps from 3,000:1 to 3,500:1. Upon initially firing up the projector things can look a bit of a mess, but the W1000+ offers fairly robust image tweaking options. Though you’re only able to tweak three preset settings (Cinema, Dynamic and Standard) before delving into the advanced menus, doing so gives you full control over minute colour detail, colour temperature, gamma and white balance controls.

Black levels are strong, with the W1000+ retaining great detail even in murkier scenes, with white levels equally vibrant. Black and white images were the worst perpetrators of the “rainbow effect”, though in no way as severely noticeable as with similarly priced projectors. Colours, once fine-tuned, can be reassuringly realistic too, though red levels remained stubbornly dominant. For once, we’d encourage using the Brilliant Colour mode: though it can initially be overwhelmingly vibrant to the point of being unrealistic, use the menu screens to tone it down and you’ll get a surprisingly punchy image. Fast-paced action scenes do little to rock the projectors motion capabilities too remaining relatively judder-free through a Blu-ray screening of The Watchmen. Overall, full HD images retained a clarity and sharpness rarely seen in projectors that break the £1,000 mark, let alone one that sits some £250 below it.

The projector even comes with a 3W built-in speaker. Now, a 3W speaker is of course in no way a fitting match for an epic movie screening. But in keeping with the projector’s budget charms, it does make the W1000+ a far more portable prospect, allowing for modest audio playback if you’re to bring this unit around to a pal’s house, without the need to lug an audio system around with you too.

Our main quibble come with the auto-keystone functionality. The projector failed to find the natural oblong shape of our 16:9 source material on a flat wall perfectly parallel to the lens. It took an age to reposition the projector and manually tweak the keystone settings before the image was taper-free. Likewise, the 1.2x optical zoom and a lack of an optical vertical lens shift meant positioning the image was far more difficult than it should have been.

At a penny shy of £750, the BenQ W1000+ is an absolute steal. Building significantly upon its already-rather-good W1000 predecessor, the W1000+ offers full HD cinema thrills at a price so competitive it’s likely to get the more expensive projector manufacturers quaking in their overpriced boots. While the keystone function and optical zoom range leave a little to be desired, the picture quality is far better than the value-price tag would lead you to believe. An excellent purchase then for the budding home theatre enthusiast.