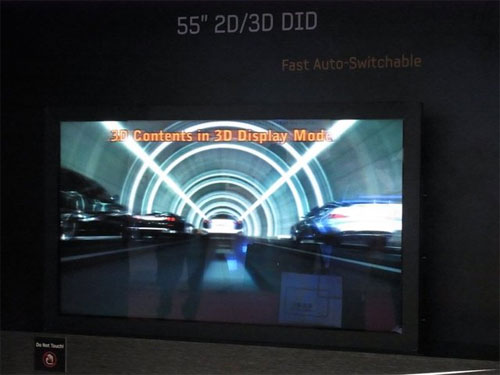 Samsung are the latest 3D TV manufacturer to show off a glasses-free 3D TV, demoing a 55 inch model at FDP China 2011.

Designed primarily for use in public places at the moment, the screen can be viewed comfortably from 9 different positions at a range of between 2.5 and 6 metres.

In terms of tech specs, brightness is set at 500cd/m2, contrast ratio is 4000:1, with the panel running in full HD. Currently in the protoype stages, it is using CFL backlighting, but Samsung says the retail units will feature LED backlighting instead, with easy 2D to 3D switching.

Before you start smashing open your piggy bank though take note of the fact that Samsung don’t plan on making these sets commercially available for several years yet, which at least will give them plenty of time to tweak the effect to perfection.