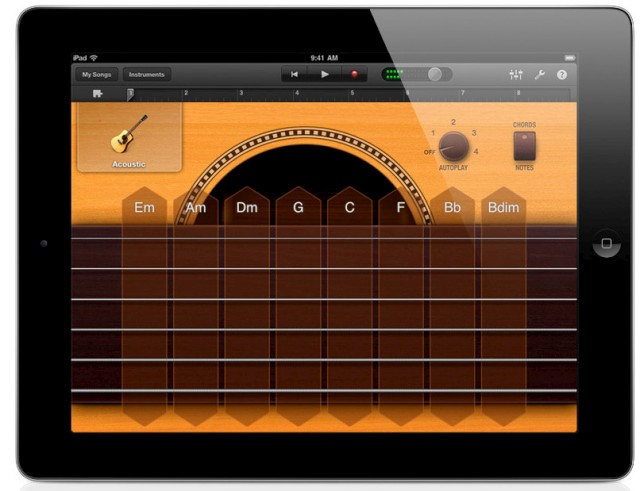 Apple launched the iPad 2 last night and with it the news that the Mac computer’s legendary music creation tool Garageband will be available as an app too at launch.

Totally touch controlled, here’s what you need to know about the democratising tune-building software.

What touch instruments are included?

Guitars, drums, drum machines, pianos and synthesizers are all included, with multiple drum kit pieces, piano and synth styles and guitar amps included to tweak sounds to emulate your favourite artists. There’s even a theromin-style effect called the Sci-Fi sound, for those who want to make a tune similar to the Beach Boy’s classic “Good Vibrations”.

Do I have to be able to play an instrument to write songs with Garageband?
While the iPad 2’s built in mic means you could record live instruments and import them to the software, even a musical dunce can write tunes using Apple’s Smart Instruments. Here, chords are acivated with a simple swipe of a finger, with only chords that sound nice together accessible. 250 loops are also installed, if you prefer to work with pre-recorded beats and melodies. Even the tone-death will be able to convince everyone they’re a mini-Mozart. 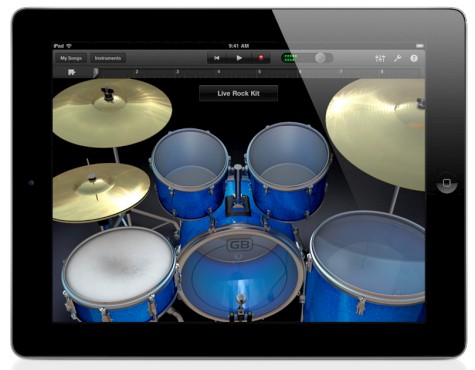 How about pressure-sensitve controls? Will it know how loud I want to hit my drums or strum the guitar?

How does it know how hard I’m pressing the keys or strumming the guitar?

Because of the built-in accelerometer and gyroscope present in the iPad 2. Just as you have pedometer apps that measure walking distance or games controlled by tilts and turns alone, the iPad 2 can measure minute differences in the position of the tablet as you hit it at varying strengths, translating it into the attack on the instrument. In other words, lightly tap the software snare drum and you’ll get a little rap, but whack it and you’ll sound like Nirvana’s Dave Grohl hammering away.

How about guitar pedals?

Ten different stomp box effects including overdrive and chorus can be added to guitar sounds, which can be re-ordered across a virtual pedal board for building an even more unique sound.

How many tracks can I lay down at once?

Garageband is an 8-track recorder, so that’s any combination of 8 melodies, drum sounds, loops, vocals or anyother sounds you can think of. You’re able to edit, trim, cut, paste and copy tracks too, just by using touch controls.

I’m not interested in music, but I do make podcasts. Could I use Garageband for this?

No reason why not. You’re able to record voices using the iPad 2’s built in mic, and add sound effects along 8 separate tracks. It may be basic, and wouldn’t have the same interactive elements of advanced podcast software, but it’d be a perfect mobile solution for voice-only broadcasts.

Yep; you’ll be able to export in ACC format and send the tracks via email.

What about if I want to edit my creations with a Mac?

You can do that too. All songs made with Garageband for iPad will be compatible with Mac Garageband software if you prefer the mouse and keyboard controls, or already have lots of dedicated recording tools in a home studio indoors.

How much will it cost?

Garageband will cost $4.99 at launch, or around £2.99, ready from day one of the iPad 2 launch. That may sound expensive for an app, but when you consider that amount of functionality from a dedicated hardware 8 track recorder plus music recording software would cost you a few weeks wages, that’s pocket money.