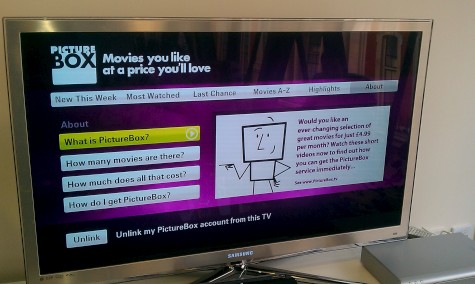 Tech Digest went hands-on with the latest addition to Samsung’s [email protected] web-connected TV platform today, suitably titled PictureBox. Exclusive to Samsung TVs, but also available on the iPad, any number of laptops and very soon the iPhone too, it’s an all-you-can-eat movie-streaming service in a similar vein to LoveFilm.

Hitting all Samsung’s 2011 [email protected] devices (including Blu-ray players, as well as legacy connected TV models) subscription to the service costs £5 a month, and carries over accessibility to any other PictureBox compatible gadgets you may own. Top-up TV owners may already recognise the name, as the service has been available there for a little while now.

PictureBox will have 28 titles at any one time available to be streamed instantly. Refreshed on a weekly basis (7 new titles come in as 7 old films are removed), the company have a robust number of studios signed up with distribution deals already, including Universal, Paramount and Icon. Each month a theme dictates the kinds of films set for inclusion on the service ie. Christmas films in December or lovey-dovey ones around Valentines day.

Content-wise the films on offer so far seem slightly older than the bang-up to date ones offered by LoveFilm, but the reasonable subscription charge, paired with the incredibly crisp visuals, considering it’s standard def content on show, more than make up for this. As you’ll most likely be using this through a Samsung TV or Blu-ray player, their stellar upscaling tech shines through.

It’s a very pretty interface too. The purple menus are very visual, with large poster-style icons displaying each film rather than reams of text, as well as a highlight reel for each month to help you pick from what’son offer. Though you may sniff at the relatively low number of films available per month, the figure does mean that searching for the titles you are after is incredibly quick, with the UI as a whole feeling very responsive.

Lots of good potential here for PictureBox then. We’d like to see more than just 28 films at a time if possible, as well as HD content or even 3D content, both of which the Samsung platform is capable of streaming. But with a PictureBox rep on hand to confirm the first 3D title should touchdown on the service by Q3 of this year, it looks all set to be a very welcome addition to Samsung’s [email protected] app catalogue.