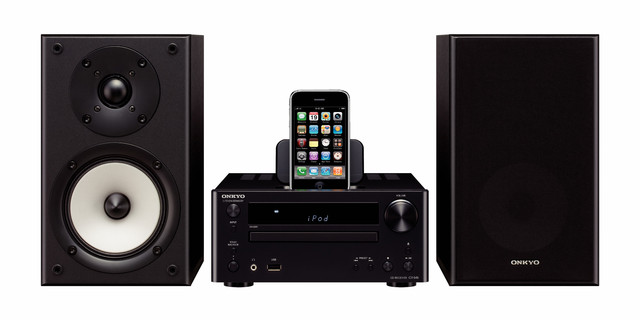 £300 wont buy you an awful lot when it comes to hi-fis these days, but Onkyo have staked a claim for one of the best budget micro sets with their CS-545UK receiver and speaker package.

Packing in an iPod dock, CD deck, DAB/FM tuner and USB MP3/WMA playback, the packaged CR-545 receiver squeezes in pretty much all the major features of more expensive units, providing you’re not fussed over the lack of network connectivity. Other audio sources can be hooked up through the AUX input, while MP3-encoded CDs are also fully compatible. It’s an impressive list for the sub-£300 price tag.

Despite the feature set, the receiver itself is neatly compact, measuring up at just 215mm wide, 98 mm high and 334mm deep. The iPod/iPhone dock (which also acts as a charger) sits on top, tidily covered by a flip-up catch. A sensibly modest set of playback controls are placed along the front with a display panel, while there are also dedicated controls for tone and bass response. With a power output of 2x 40w channels, it’s not quite as muscular as a more expensive set up, but more than enough for most reasonably sized homes. Its boxy, somewhat-retro look also got the thumbs up in the office.

Though the CR-545 receiver can be bought separately, the CS-545UK package throws in a pair of D-045 bookshelf speakers for around £100 of extra cash. While out-of-the-box speakers normally leave a lot to be desired, the D-045s are actually very good. There’s the option of a stand-alone subwoofer output, but you’re unlikely to need it. The included speakers are detailed and with a near-perfect bass balance (providing you switch off the rather awful Super Bass option), and are well worth the added expense if you don’t already have a preferred set lying around indoors. It’s unsurprising, given Onkyo’s stellar track record as a speaker supplier.

The remote control, while reasonably sized and comfortable in use, isn’t the most intuitive of remotes we’ve used, with many similar commands unnecessarily spread over too many buttons. With that in mind, if we had one complaint to level at the CS-545UK hi-fi package, it’s that controlling playback from the multiple sources on offer can be needlessly fiddly, particularly when playing from a USB stick or CD-R. While there is the option to output the menus to a big screen over a composite video connection, it’s all still overly complex.

We’ve had a lot of fun with the CS-545UK set. It offers warm, room filling sound that, despite its relatively small asking price, comes with a pair of speakers that even the most demanding of audiophiles wont be in a hurry to replace. It’s let down somewhat by its confusing remote and USB playback, but all in you’ll be hard pushed to find a better mini hi-fi for the money than this.