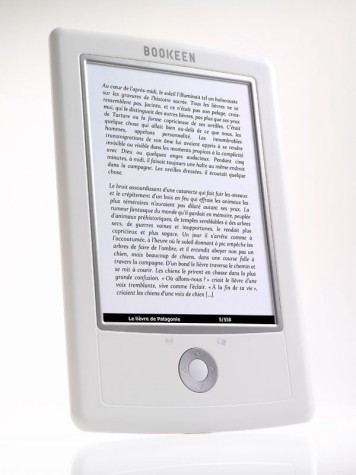 Just like the tablet market, e-readers are quickly becoming ten-a-penny down at your local tech store. Kindle still rules the roost thanks to its neat web connectivity options and clear display, while Sony’s Reader Touch offerings inhabit a slightly different space thanks to their touchscreen controls. Looking to join the fray and sit somewhere between the two is Bookeen’s Cybook Orizon, featuring both a touchscreen and Wi-Fi connectivity.

At 7.6mm thick, Bookeen are positioning the Orizon as the world’s thinnest e-reader. With a 6 inch screen in a 7.5 inch chassis it is comfortable in the hand, and incredibly light at just 245 grams. The curved plastic design, available in either black or white, is inoffensive, though we did feel it leant the reader a somewhat flimsy feel. Though the Orizon can be operated almost entirely by the touchscreen, it does feature a 4-way ring of directional navigation buttons at its lower centre, surrounding a central select button. They’re nice and responsive, though we’d have personally appreciated them being raised slightly rather than inset. Charging via USB and connecting as a mass storage device, the reader is good for 10,000 page turns from a 5 hour charge, or a little less than two weeks in standby mode.

Touchscreen e-readers have suffered in the past from crippling glare due to the necessity of placing two sheets (the e-ink and touchpanel) on top of another. The Orizon uses SiPix ePaper to negate this problem, with the e-ink and touch areas housed within the same layer. As result, it’s a very readable display, that, while not glare free, does well to compete with the big-name rivals. A resolution of 600 x 800 is detailed enough to maintain text clarity, as well as displaying grayscale JPEG, GIF and PNG images. 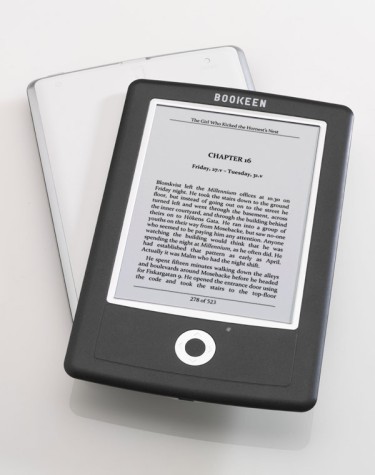 The touch controls are, for the most part, responsive. Swiping through pages is quick, and while the e-reader can be a bit iffy on selecting the right options from some of the more fiddily menus, it’s normally up to the job. Multi-touch controls, including pinch-to-zoom text resizing, are nice additions, but the 400MHz Samsung ARM processor running the show means that the delay between the touch input and changes being relayed to the screen is quite significant. You’re just as well served using the physical buttons and navigating to the appropriate font options that way.

2 GB of inbuilt memory allows for as many as 2,000 books to be stored onboard, expandable by a further 8GB through the Orizon’s microSD slot. It’ll handle most major ebook file formats well, including Adobe ePUB/PDF (with or without DRM), TXT and HTML files. The e-ereader is also advertised as shipping with 150 free ebooks, but that’s not wholly true; many are duplicated in various languages. The real number is closer to 45, depending on whether or not you count manuals. Nearly all are available free from the likes of Project Guttenberg regardless.

The Orizon’s main fault lies with its woeful Wi-Fi connectivity. I rarely was able to connect to a network, even when the e-reader displayed a 100% signal strength from the desired router. The problem remained when testing with multiple networks. It meant that downloading books and transferring them without pulling your hair out will be almost entirely down to using a PC and USB connection. On the handful of occasions that I was able to connect, the built-in browser worked fine, if unremarkably. It did however highlight how handy it is to have an accelerometer in a web-connected e-reader, which the Orizon thankfully has.

While the e-ink touchscreen is readable and relatively responsive, with good file format support, the consistent Wi-Fi issues were quite frustrating. As far as touchscreen e-readers go the Cybook Orizon is definitely among the better ones, but with its poor Wi-Fi connectivity being the only feature that had the opportunity to outshine Sony’s latest Touch reader range, it feels decidedly average in comparison. Coming at a much higher premium than the £150 3G-enabled Amazon Kindle, recommending the Cybook Orizon becomes rather difficult.