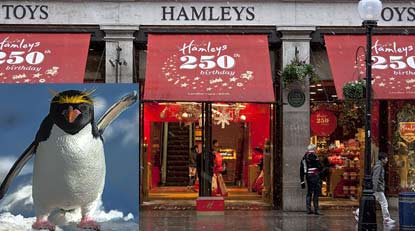 Hamleys’, the UKs most famous toy shop, have u-turned on plans to bring live penguins into their flagship Regent Street store in London after facing a fierce social media backlash from animal welfare supporters.

Whereas Hamleys’ had initially billed the instore appearance as an educational event, activists dismissed it merely as a profit-turning PR stunt that had not taken into consideration the birds’ welfare.

As well as many complaints from individuals via Twitter and Facebook denouncing the plans, the 10,000 Birds blog was scathing in it’s attack on the store sarcastically asking: “Which ‘prestigious’ London toyshop has forgotten that a) penguins are live animals not stuffed toys, b) that we’re no longer in Victorian times, and c) that putting penguins into a crowded very hot toy store in the midst of a typical mindless Christmas shopping crowd is not good animal welfare?”

Animal rights activist and wildlife photographer Darren Hector visited a store and found two reindeer kept in cramped, heated conditions. So appalled, he photographed the scene and posted them to his blog, calling them “The saddest pictures I have ever taken”.

Hamleys’ have now axed plans to bring the birds instore, as well as promising to remove the reindeer too. In a statement on the shop’s Facebook page, Hamelys’ said:

“Hamleys’ recognises having penguins in store has raised concerns amongst some of its customers and, as a result, we have decided to cancel their proposed appearance next week. Whilst we were taking every measure possible to ensure the welfare of the penguins, we have listened closely to people’s views and feel this is the best course of action.”

Another win for the power of the web and for impassioned individuals out to make a difference. Well done!